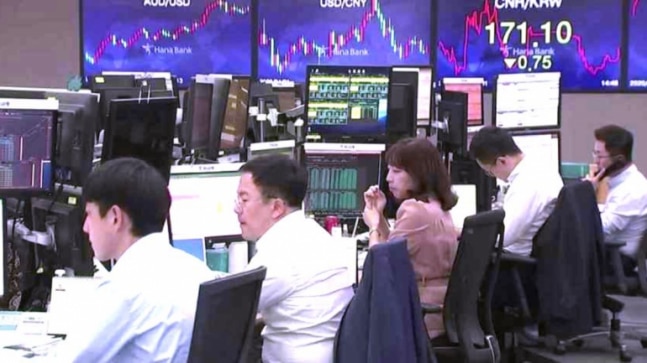 World shares were just shy of a five-month peak and the dollar dipped on Monday as investors watch second-quarter earnings for signs that corporate profits have hit their lowest and are starting to recover as coronavirus lockdowns ease.

Wall Street banks JPMorgan, Citigroup and Wells Fargo are set to kick off on Tuesday a US results season that Refinitiv data suggests will show the second-biggest quarterly drop in corporate earnings since 1968.

“Equity indices are clearly trying to look through into Q3 and beyond, but with the US struggling to shake off the coronavirus phase one, this should be factored into equity risk premia,” said Raymond James European strategist Chris Bailey.

The optimism carried into Europe, where stocks rose 1 per cent even after the United States on Friday slapped additional duties of 25 per cent on French luxury goods valued at $1.3 billion, in a tit-for-tat response to France’s digital services tax.

MSCI’s All-Country World Index was one point away from hitting Feb. 26 highs. E-Mini futures for the S&P 500 ticked 0.7 per cent higher despite record new cases of Covid-19 in the United States over the weekend, a divergence that shows no sign of stopping.

“Ongoing grim US Covid-19 infection news continues to be summarily ignored in favour of ongoing optimism regarding the timeline for the discovery and rapid roll-out of an effective vaccine and/or more policy support for asset prices and the US economy,” said Ray Attrill, head of FX strategy at NAB.

The risk-on rally saw the US dollar dip 0.1 per cent against a basket of major currencies after three straight weeks of losses.

The euro, meanwhile, rose 0.2 per cent to $1.132 to maintain its slow uptrend since late last month. Looming large for the common currency was a planned EU summit on July 17-18, where leaders need to bridge gaps on long-term budget and economic stimulus plans.

“If an agreement weren’t to be reached there, then they still expect one within weeks. It’s worth remembering that there are number of complex issues to be worked out,” Deutsche Bank strategist Jim Reid said.

Safe-haven German yields rose slightly, and Italy’s 10-year yield hit the highest level in over a week at 1.33 per cent in early trade as investors bagged profits after the recent rush to safety cooled.

Super-low rates have in turn been a boon for non-yielding gold which hit a near nine-year high after five straight weeks of gains. The metal was last at $1,807 an ounce, just off a $1,817.17 top.

The hunt for yield has tended to benefit emerging market currencies and those leveraged to commodities such as the Australian dollar, while weighing on the US dollar.

Oil prices eased in early trade, although that followed a sharp rise on Friday when the International Energy Agency (IEA) bumped up its 2020 demand forecast.