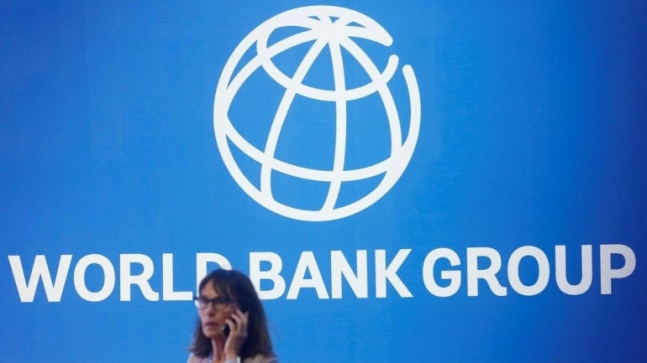 After a slew of interventions by the World Bank targeted towards health and migrant labour post-Covid in India; the bank has approved a $750 mn MSME Emergency Response program to support increased flow of finance into the hands of micro, small and medium enterprises.

A participant stands near a logo of World Bank at the International Monetary Fund – World Bank Annual Meeting 2018. (Photo: Reuters)

The backbone of India’s economy, small businesses will take long to recover, the World Bank has zeroed in on the sector with a $750 million emergency response program and is working with the government on building a platform for MSMEs to get financiers to take on raised invoices -cutting through the delay that MSMEs face in receiving payments

India’s MSME sector forms the life-blood of India’s economy; contributing to 30 per cent of India’s GDP and 40 per cent of exports. After a slew of interventions by the World Bank targeted towards health and migrant labour post-Covid in India; the bank approved a $750 mn MSME Emergency Response program to support increased flow of finance into the hands of micro, small and medium enterprises.

The bank identified massive liquidity issues hurting the MSME sector and constraints in the flow of finance from banks and NBFCs to the MSMEs as some of the main issues that need to be resolved to enable the MSMEs to participate in the recovery of the business cycle. The programme, states the bank, will channel liquidity by de-risking lending through a range of instruments. According to World Bank data only about 8 per cent of MSMEs are supported by formal credit channels. And the program will incentivise and mainstream the use of fintech and digital financial services in MSME lending and payments.

The $750 million loan has a maturity of 19 years including a 5-year grace period.

“This was the space in the economic ecosystem that we had our eyes on.. this intervention is really about keeping the lights on. The first priority is to make sure if you are a healthy MSME then every opportunity is given to you that you are healthy after the crisis..liquidity and access to finance is the most critical feature ..the government and RBI have taken a lot of measures but the liquidity was not making its way through because banks, NBFCs were very risk averse.” Said Mehnaz Safavian, Financial Sector Specialist at World Bank Group in an interview to India Today. ” We are providing resources to the government and having parallel conversations with the banks to ease risk aversion in their lending.”

Access to credit continues to be the foremost concern for most MSMEs, in the absence of any direct liquidity infusion into MSMEs by the government, MSMEs are dependent on banks and NBFCs to utilise the credit guarantee scheme that provides a collateral-free loan to the MSME with the government undertaking the risk of the loan. The finance ministry on Tuesday has said that banks have sanctioned over Rs1 lakh cr of loans under the Rs3 lakh cr Emergency Credit Line Guarantee Scheme. The scheme is the biggest fiscal component of Rs20 lakh crore ‘Aatmnirbhar Bharat Abhiyan’ package announced by the government.

Another concern often raised by MSMEs is non-payment of dues, especially by government agencies and PSUs, a point made rather emphatically by the MSME minister Nitin Gadkari on several occasions – about Rs 5 lakh cr is owed to the MSME sector.

The World Bank is working with the government on building a digital platform, TReDS for facilitating the financing/discounting of trade receivables of Micro, Small and Medium enterprises through financiers. These receivables can be due from corporates and other buyers, the MSME can upload the invoice and get the receivable almost immediately -liquidity that will enable the MSME to keep the business cycle going. This mechanism has been implemented in other emerging markets and have met with success. But the current challenge is to get more financiers on board.