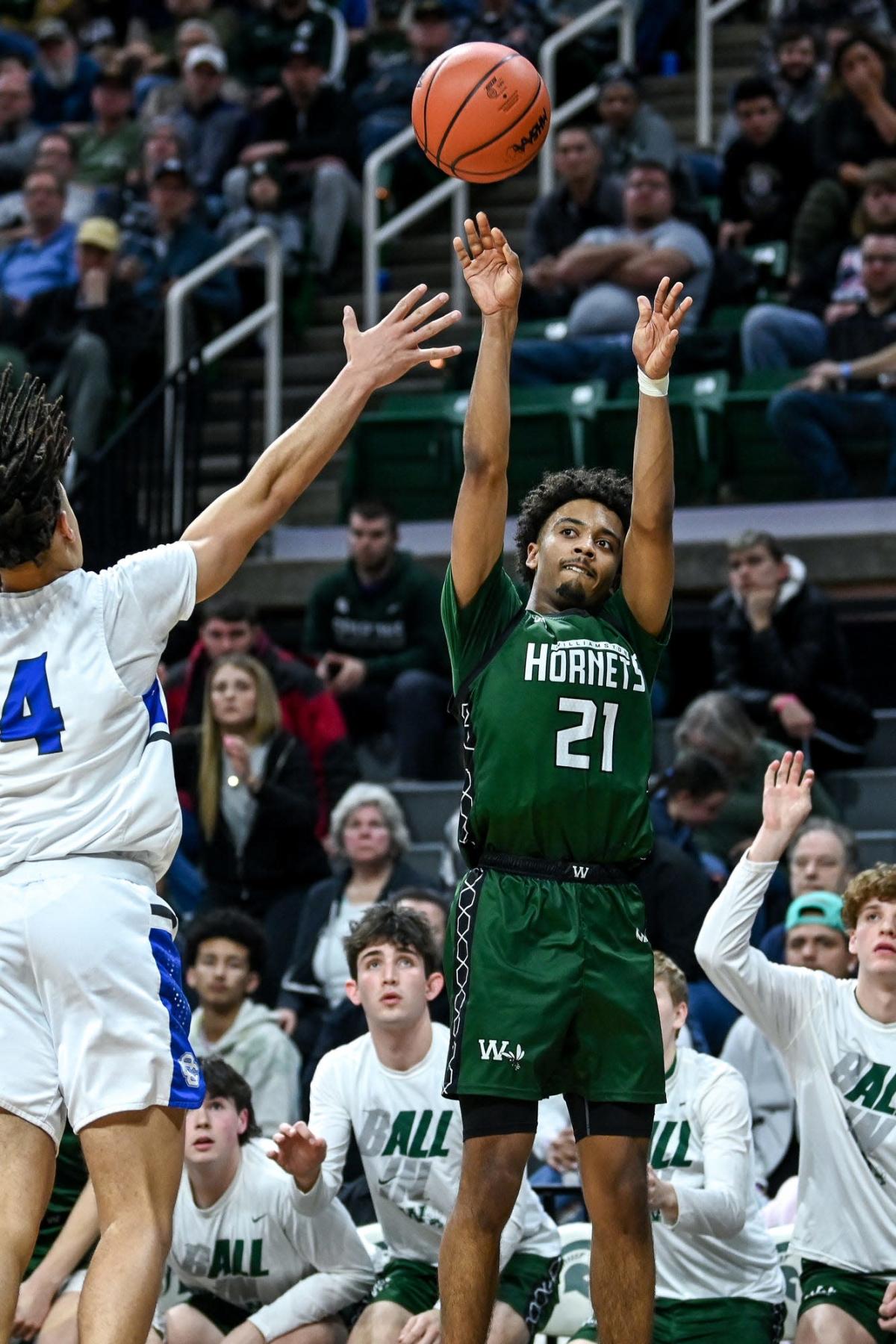 EAST LANSING — As Mason Docks celebrated a state championship with teammates on the Breslin Center floor Saturday night, he was exactly where he wanted to be

When the senior guard returned to Williamston this school year after being in Houston for a year because of his father’s job, he envisioned ending his career with a state championship.

And to see what he pictured become reality with the top-ranked Hornets’ 68-65 overtime victory over second-ranked Grand Rapids Catholic Central brought relief to Docks.

“(We’re) very satisfied,” Docks said after scoring a team-high 27 points. “This is what we’ve been working for all season and what we’ve been dreaming about. All the unfinished business — it’s taken care of now. It all came true. It’s just a crazy feeling right now. I don’t even know if it has all hit me yet. You can’t beat it.”

Unfinished business has been a constant theme for Docks and teammates throughout the season. And it has stemmed from a 2020 state tournament run the Hornets never got to experience with COVID-19 halting the season in the middle of district play.

Williamston was 20-2 in that 2020 season and thought it had a team capable of doing something special with Docks and Jay Wallace as key players. Not getting that chance stuck with Docks and teammates.

Docks also saw from afar how Williamston’s season ended in disappointment last season with a regional finals loss to Battle Creek Pennfield on its home court.

So when Docks returned, the Hornets were optimistic they could take care of things on the court with a veteran group.

“We were sticking with all these teams in summer league and just to hear that news (of Mason’s return) — it was written in stars,” Williamston senior Max Burton said.

Docks, who will continue his career at University of Maryland, Baltimore County, shined under the bright Breslin Center lights to help the Hornets get their dream ending and complete a perfect season. He averaged 23.0 points during the championship weekend and shot 53% from the field.

Docks connected on 6 of 8 3-pointers during the championship win over GRCC, which included hitting the 3 that put Williamston ahead for good during the middle stages of overtime.

Docks’ shooting display, combined with a 23-point outing from Burton, helped Williamston cap its season with a 27-0 mark and its first state championship since 1940.

Williamston coach Tom Lewis said Docks’ performance was what he and staff have been prodding him to deliver over the last third of the season.

“We knew we were going to need a performance like this at some point (from Mason),” Lewis said.

“When he hit those first couple — he’s electric. When he hits his deep 3s, he’s really tough to guard and then he can get to the hoop and then he can assist and hit free throws. It was big and we needed that big performance.”

It came at the perfect time with the Hornets facing their toughest test in defending state champion Grand Rapids Catholic Central, who played Williamston to just its second game decided by less than 10 points all season.

“I knew in my mind we were going to win it all (with Mason),” Wallace said. “He is the best player that I’ve ever played with and I’ve been playing with him since I was in sixth grade. Not only does he do great things on the court, but he makes all of his teammates better. I’ve been playing AAU with him for a very long time and I’m thankful I met him and his dad and was able to play with him because it has made me a much better basketball player as well.”