What is so different about this petrol-diesel price hike? 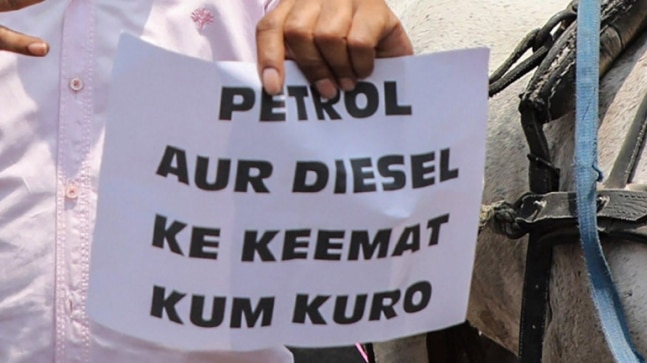 In the latest move on Tuesday, the oil companies hiked the prices of petrol and diesel, for the 17th day in a row, by 20 paise and 55 paise respectively. On Monday, prices had been hiked by 33 paise and 58 paise per litre respectively.

The cumulative increase for petrol in the fortnight is Rs 8.5 per litre and diesel Rs 10 a litre. This is the biggest fortnight hike in petrol and diesel prices since April 2002 when the Atal Bihari Vajpayee government deregulated the oil fuel prices to bring them in tune with the international prices.

However, Indian consumers have never really benefited from the low prices of crude oil in international market as OMCs did not pass on the equitable benefit or the central government chose to bring in an increase in excise duty and the state governments hiked VAT rates.

Some news reports have claimed that the previous highest increase in petrol and diesel prices remained in the range of Rs 4-5 per litre.

While the massive hike in fuel prices has made diesel costliest in Jaipur at Rs 79.95 (more than Delhi) and at many other places, petrol prices are yet to breach their record high rates.

Petrol is rallying towards its high mark of Rs 84 a litre in Delhi, recorded on October 4, 2018. On Tuesday, petrol sold at Rs 79.76 a litre in Delhi. Prices of both petrol and diesel differ in different states as they have varying rates of VAT and other levies.

At the time of previous high, pushed by international prices which were flying north primarily due to rising US-Iran tension, the government had slashed excise duty by Rs 1.50 on both petrol and diesel.

Additionally, the government had told the oil marketing companies to absorb another Rs 1 per litre to ease the burden on consumers.

Later, the government over-compensated that excise duty cut by raising it on petrol and diesel by Rs 2 in July 2019.

Again in March this year, with revenue crunch taking its toll on government expenditure, the Centre hiked excise duty on petrol and diesel by Rs 3 a litre.

In the follow-up revision, the government increased excise duty by Rs 10 per litre on petrol and Rs 13 on diesel both a record for hike in May.

As of Tuesday, nearly two-thirds of the petrol and diesel prices paid by consumers are taxes. In the case of petrol, the total tax is 64 per cent and for diesel, it is 63 per cent.

In absolute terms, tax amounts to over Rs 50 in the cost of one litre of petrol and nearly Rs 50 for each litre of diesel. In both cases, over 60 per cent of taxes go to the Centre as excise duty and rest to states as VAT.