Vanstone: Roughriders’ brain trust must deliver a title in 2022 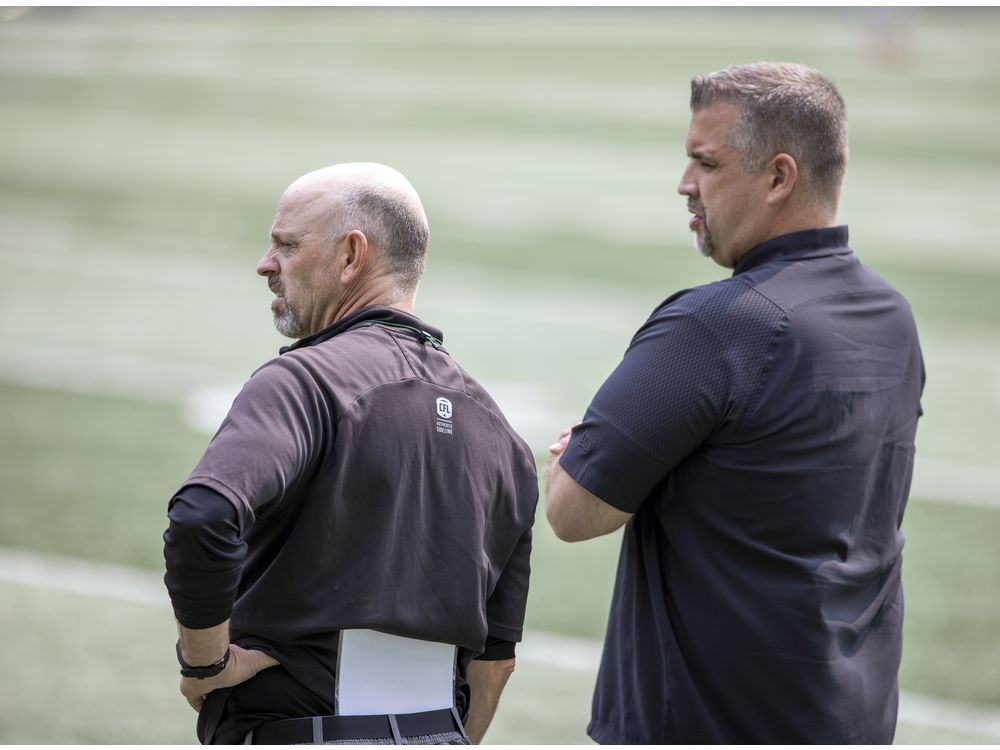 After coming close to a Grey Cup berth in the last two seasons, the 2022 Roughriders need to advance to the big game — and then win it.

“Bring it to the Heartland,” which was announced Tuesday as the theme for a Regina-based Grey Cup festival that is to run from Nov. 15 to 20, should also serve as marching orders for Dickenson, O’Day, et al.

If they can’t bring another Grey Cup to the heartland of Canadian professional football in a year such as this, there will be plenty of explaining to do.

The template was set in 2013, when head coach Corey Chamblin and general manager Brendan Taman were the architects of a Saskatchewan side that defeated the Hamilton Tiger-Cats 45-23 on Taylor Field to win the 101st Grey Cup game.

The foundation of the current edition of the Roughriders was established in 2019, when O’Day and Dickenson were promoted to the positions that they now occupy.

They have staged back-to-back home playoff games, only to lose to the arch-rival Winnipeg Blue Bombers both times.

In 2019, the Green and White boasted a 13-5 record and celebrated a first-place finish for only the second time in a span of 43 seasons, only to lament a 20-13 home-field loss to the Winnipeg Blue Bombers in the West Division final.

Most recently, the Roughriders went 9-5 before posting a 33-30 overtime victory over the visiting Calgary Stampeders in the 2021 West semi-final.

Then came another meeting with Winnipeg, which served up six turnovers but nonetheless emerged with a 21-17 victory over the non-opportunists from Saskatchewan in the West final.

So the bar has been set — by Winnipeg.

The precedent has been set — by the 2013 Roughriders.

Now it is time for O’Day, Dickenson and associates to make history.

They will tell you that the objective is to win the Grey Cup every year, regardless of where the championship game is being played. That is noble and undeniable.

But there is an exponential elevation in the pressure, along with the expectations, in a year such as this — especially when the Roughriders, under the current regime, have been knocking on the door without being able to find the key to victory.

In 2019, the outcome of the West final was not determined until the final play, which concluded when Cody Fajardo’s pass toward Mosaic Stadium’s north end zone clanked off the crossbar.

On Dec. 5 at IG Field, a 67-yard touchdown pass from Fajardo to Duke Williams on the final play of the third quarter allowed the visitors to assume a 17-14 lead.

Over the final 15 minutes, Winnipeg owned the time of possession (11:05 to 3:55), registered seven first downs (five more than Saskatchewan) and went 6-for-8 on second-down conversions (the Roughriders were 0-for-4).

For the Roughriders and their fans, disappointment has been the theme of the last two West finals.

Surely, denizens of the heartland have endured enough heartbreak by now.

The news seems to be flying at us faster all the time. From COVID-19 updates to politics and crime and everything in between, it can be hard to keep up. With that in mind, the Regina Leader-Post has created an Afternoon Headlines newsletter that can be delivered daily to your inbox to help make sure you are up to date with the most vital news of the day. Click here to subscribe.