On March 29, right after the first lockdown was announced by Prime Minister Narendra Modi, the government – through an order signed by the Union Home Secretary Ajay Bhalla – made it mandatory for employers to pay full salary to workers and protected their jobs.

The order, under section 10(2)(I) of Disaster Management Act 2005 issued by the Home Secretary as chairperson of the National Executive Committee, asked all state governments and UTs administrations to ensure “all employers, be it in the industries or shops and commercial establishments, shall make payment of wages to their workers at the places of work, on the due date, without deductions for the period their establishments are under closure due to lockdown”.

This order echoed a Labour Ministry’s advisory regarding no wage cut or retrenchment. But it had greater significance as the Home Ministry’s order was backed by the Disaster Management Act, which means adherence was mandatory and violation would have invited punitive action.

But on May 17, the new guidelines for Lockdown 4.0 seem to have undone this protective cover. The latest guidelines again signed by the Union Home Secretary, in the third paragraph, lays down that “All orders issued by National Executive Committee under section 10(2)(I) of Disaster Management Act 2005 shall cease to have effect from May 18”. 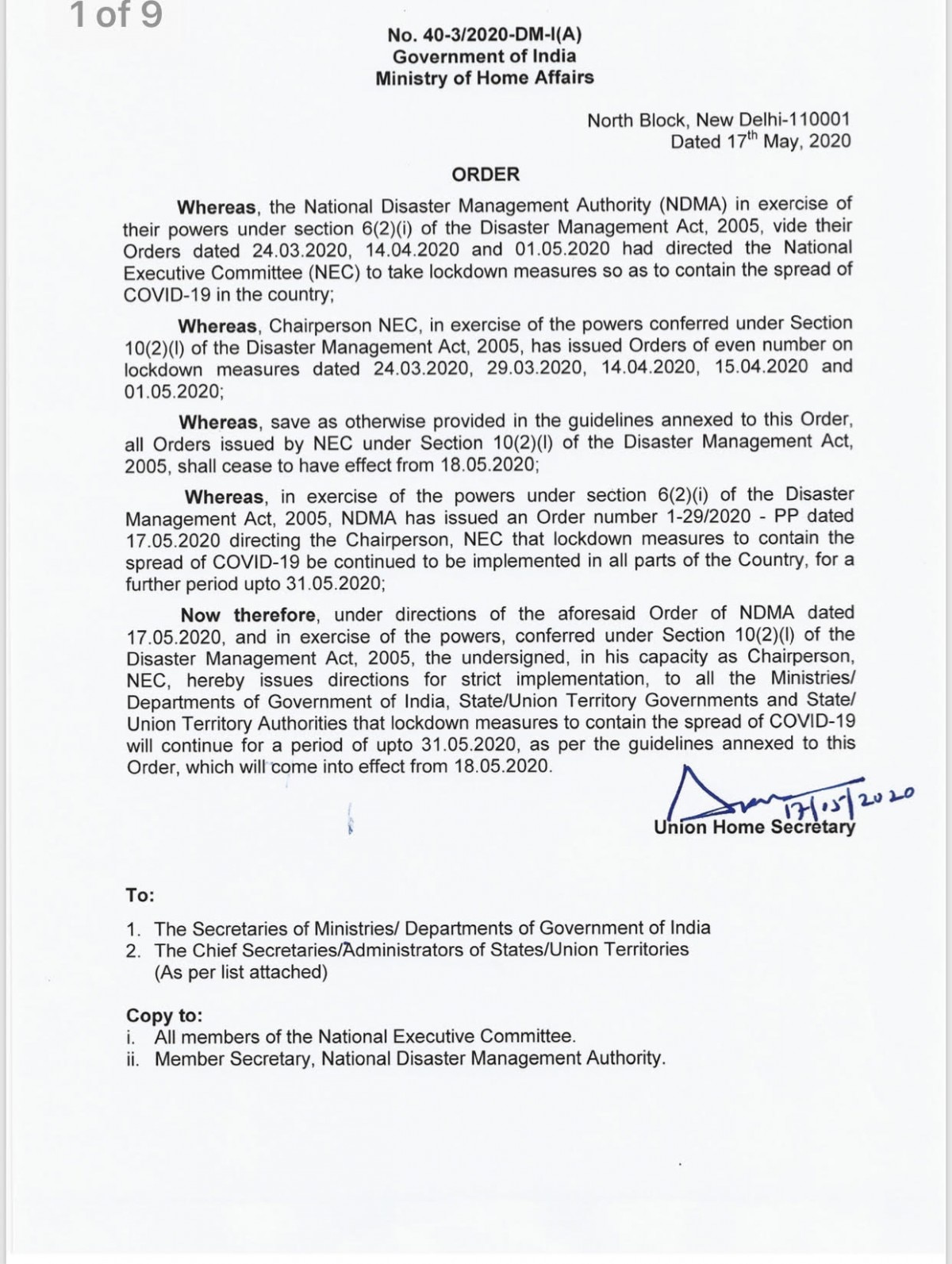 Labour organisations are up in arms over the central government’s guidelines for Lockdown 4.0.

While Left and Congress-backed labour organisations have criticised the government for abandoning the poor and destitute workers, even the entities part of the RSS have termed the move as “grave injustice”.

Virjesh Upadhyay, the general secretary of the Bharatiya Mazdoor Sangh – an RSS affiliate – said, “We are not in support of such moves by the central government. This is complete injustice. While employees of the government and other organisations have pay security why is there no guarantee for workers? BMS will hit the streets on May 20 demanding wage security, livelihood protection and reversal of dilutions in labour laws by several state governments.”

The government has not given any clear reasoning on why a particular previous order protecting economic destitute has been knocked off. However, sources in the government say that the withdrawal of earlier orders comes after the Supreme Court barred the government from taking any coercive/punitive action against companies for disobeying Home Ministry order on-time payment of full wages to the labourers.

Sources say that since the SC order barred it from acting against the erring employers there was little logic in continuing with the section. A senior government source said, “Government thought better to withdraw the order as it lost relevance in the absence of right of action for violation.”

Aggrieved over the March 29 order, multiple business entities had petitioned the Supreme Court against it. Their plea said a blanket direction from the government to private establishments to pay full salaries against no work was arbitrary and violative of Article 14 (Right to Equality) of the Constitution.

On Friday last, the country’s apex court ruled that the government cannot resort to coercive action against private companies who have not paid their workers’ full wages during the lockdown in regards to the Home Ministry’s order.

The three-judge Bench felt that on-time payment of full wages during lockdown may not be viable for small and private enterprises, which themselves are suffering during the lockdown.

READ | India has 7.1 COVID-19 cases per lakh population as against 60 globally: Health Ministry