UCLA poised for 2023 title run? Bruins could return much of their core 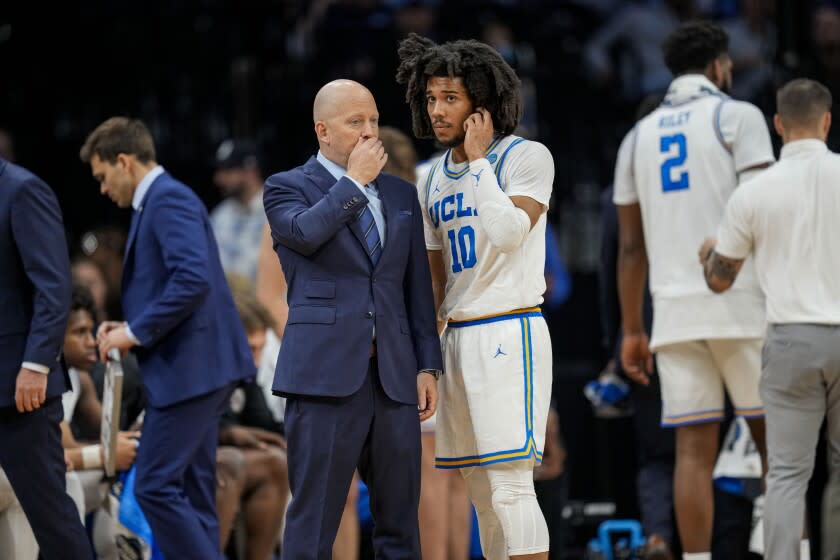 Sequels rarely live up to the original.

UCLA ran it back with everyone from its 2021 Final Four run, only to careen into heartache two wins short of a return trip to college basketball’s biggest stage.

The antagonists from a season-ending loss to North Carolina in an East Region semifinal were numerous. Heroes from last season stumbled. Rotations that prioritized offense over defense were questionable. Perhaps, most importantly, the Bruins ran into another team that created its own destiny with wild shot-making and an acrobatic inbounds save that could replay in their minds for eternity.

In theory, next season could become the final chapter in a trilogy. Everyone on UCLA’s roster has remaining eligibility. Yet times change, people move on and newcomers arrive.

At least three players must leave to clear spots for freshmen Amari Bailey, Adem Bona and Dylan Andrews as part of a recruiting class ranked No. 8 nationally by 247Sports despite its relatively small size.

Seniors Cody Riley, Jules Bernard and David Singleton were honored before UCLA’s final home game, suggesting a farewell. But coach Mick Cronin said Singleton might return for the extra season of eligibility granted by the NCAA in the wake of the COVID-19 pandemic.

Even less certain is the status of starters Tyger Campbell, Jaime Jaquez Jr. and Johnny Juzang, who returned this season in hopes of helping his team raise a national championship banner while boosting his NBA stock. Juzang is projected as a second-round selection by many mock draft boards in the wake of an inconsistent, injury-plagued season.

Already one of the most beloved Bruins in recent history because of his gutsy play and refusal to succumb to injuries, Jaquez could be enticed to return by his devotion to his teammates, not to mention the arrival on campus of sister Gabriela, who will be a freshman on the UCLA women’s basketball team next season.

Campbell has two seasons of eligibility remaining and could very well utilize at least one while continuing to give the Bruins the steady playmaker they have come to rely on since Cronin’s arrival.

Emerging name, image and likeness deals could help Cronin retain much of his core. Campbell has a Fat Sal’s sandwich named after him, Juzang has his own bobblehead and Jaquez recently announced a family deal with a lending company that included his sister, potentially further incentivizing his return.

None of the deals provide NBA money, but they all give players valuable opportunities to build their brands and bolster their savings accounts before cashing their first professional paycheck.

Perhaps the most fascinating decision will involve Peyton Watson. Many fans might assume that a freshman who averaged 3.3 points per game while shooting 32.2% would have no choice but to return. They would all be forgetting that NBA teams draft primarily on upside, with Watson’s considered the highest among the current UCLA players given his superior length and athleticism.

Watson was also coming on strong toward the end of the season, playing more in control on offense to go with his consistently stellar defense in limited minutes. Watson and fellow lockdown defender Jaylen Clark played a combined eight minutes against North Carolina, leading to a message board meltdown among fans.

A lack of playing time could also factor into the makeup of next season’s roster. As much as he’s valued by the coaching staff for his unselfishness and impact in a reserve role, Jake Kyman could depart because his role doesn’t figure to expand.

The arrival of three highly coveted freshmen will make minutes even harder to earn for the fringes of the roster. Bailey is a precocious playmaker and gifted scorer who could immediately challenge for a starting spot. Andrews will give Campbell — should the redshirt junior return — his first true backup at point guard. Bona is expected to provide the post offense the Bruins were missing with the combination of Riley and Myles Johnson, who averaged a combined 3.2 points in this NCAA tournament.

UCLA will also add two more players to its rotation with the return of guard Will McClendon and forward Mac Etienne from knee injuries that ended their seasons before they began.

One might need to enlist math whiz Russell Stong IV, the walk-on guard who is obtaining degrees in mechanical engineering and business economics, to figure out all the possible roster permutations.

The Bruins could have as many as three first-team All-Pac-12 players and three members of the conference’s all-defensive team returning. The freshmen will need to learn Cronin’s nuanced defense and won’t be gifted starting spots, no matter how much hype they generated in high school (see Watson, Peyton).

So, who will start? Who cares?

Those who return will do so in hopes of giving the Bruins the one thing they have lacked for more than a quarter century, amid Final Four runs and first-round losses and seasons ending short of the NCAA tournament.