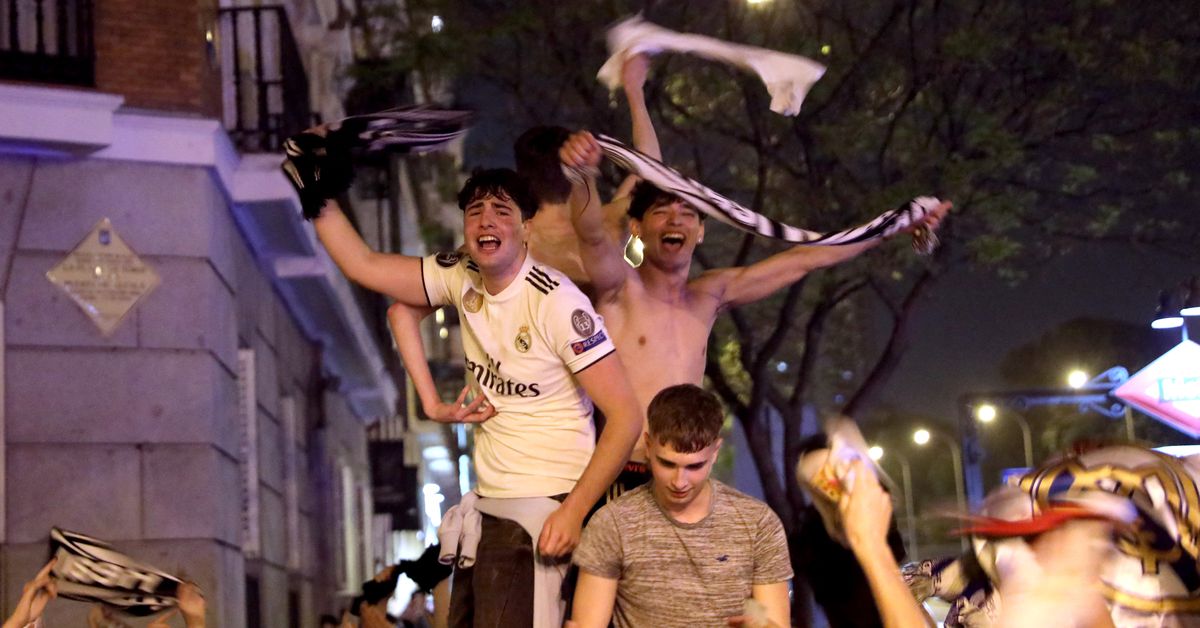 MADRID, April 30 (Reuters) – About 150,000 jubilant Real Madrid fans flocked to the city’s central Cibeles fountain on Saturday to join the players for a celebration of their record-extending 35th LaLiga title which was clinched with a 4-0 home win against Espanyol.

The supporters started gathering around the central landmark where the club usually celebrate their successes almost an hour before the end of Saturday’s game, which Real won easily with two first-half goals by Rodrygo spurring them on. read more

Traffic restrictions were put in place as early as Friday while a stage was built around the fountain where the players on an open-top bus traditionally join the fans coming from the Santiago Bernabeu to continue the party.

It is the first time Real supporters have had a chance to gather without wearing masks for a celebration after the COVID-19 pandemic as the club’s last league title triumph in 2020 was in the middle of lockdown.

The party started in the stadium with captain Marcelo leading the show.

It was a record-breaking day for the Brazilian defender who won his 24th piece of silverware with Real to leapfrog Gento as the player with the most trophy wins in the club’s 120-year history.

He joined Benzema in lifting the trophy and led the team around the stadium as the players and coaches celebrated with their families on the pitch for more than an hour as thousands of fans remained in the stands to share the moment.

Two hours after the game the players arrived at Cibeles and Marcelo, in what is set to be the last of the 33-year-old’s 16 seasons at the Spanish club, took the traditional responsibility of ‘crowning’ the Greek goddess statue.

He placed a Real Madrid scarf around the head of the statue and a white flag with the club’s coat of arms over her chest as his team mates and fans raised their hands, waving in rhythm with ‘We Are The Champions’ which was being played loudly.

Real’s usually low-profile Italian coach Carlo Ancelotti was one of the more animated during the celebrations in the stadium and at Cibeles, closing his speech to the fans by shouting a battle cry: “Let’s go against Man City!”, in reference to their Champions League semi-final, second leg on Wednesday.

That game was the reason for the party ending early by Spanish standards, with the players leaving just past 9pm local time. Ancelotti had rested several regular starters with Real hosting the second leg in just a few days’ time trailing 4-3.

Club president Florentino Perez was thrilled with the title and did not leave without words of praise for his team.

“We got everything right, from the players to the staff and the coach. For us, Ancelotti is just the best,” Perez said.

Ancelotti told reporters he believes celebrating “is great for the mental aspect” but stressed that Sunday is a work day.

“We are professionals. Tonight we all celebrate together. Tomorrow we train and on Wednesday we have another important game,” Ancelotti addeid.

The only Real player to miss the celebrations was Wales forward Gareth Bale, who has rarely played this season due to injury, with fans and local media having turned on him.

He was greeted by loud boos earlier this month as he made his first competitive home appearance on the Bernabeu pitch in more than two years during Real’s 2-0 win over Getafe.

“So disappointed that I’m not able to be part of the celebrations this evening due to a bad back spasm but really proud of the team for winning the title! Enjoy tonight boys! #HalaMadrid,” Bale wrote in his social media accounts.