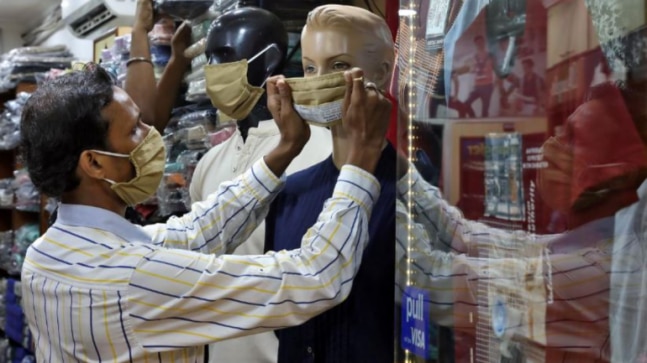 Lenders have paid out just Rs 122 billion, barely 4 per cent of the sum earmarked, and approved loans worth Rs 242.60 billion since the third week of May, according to finance ministry data released on Thursday.

A worker adjusts a protective face mask on a mannequin at a garment shop after shops reopened as India eases lockdown restrictions that were imposed to slow the spread of the coronavirus disease, in Kolkata, India, June 10, 2020. REUTERS/

India’s ambitious plan to provide some Rs 3 trillion in loans to small businesses to boost an economy ravaged by the coronavirus pandemic has got off to a slow start with banks disbursing only a tiny fraction of the available funds.

Lenders have paid out just Rs 122 billion, barely 4 per cent of the sum earmarked, and approved loans worth Rs 242.60 billion since the third week of May, according to finance ministry data released on Thursday.

A senior finance ministry official accepted that according to feedback received from the industry, the scheme is facing several problems, and the government is trying to convince bankers to implement the scheme in “letter and spirit”.

However, a senior banker at a public bank also said there had been a clear lack of demand because of the country’s lockdown.

“Businesses don’t want to avail themselves of it so the traction has been low,” he said.

The finance ministry and the Indian Banks’ Association, an industry body for lenders, did not immediately respond to a request for a comment.

India last month unveiled the fully-guaranteed government-backed loan scheme for small businesses, which account for nearly a quarter of India’s economy and employ hundreds of millions of workers, according to government estimates.

New Delhi has been urging banks to lend more to these firms which have been hit by the more than two-month lockdown to rein in the spread of the virus. However, lenders worry about defaults.

Bankers say there is “constant monitoring” by the government and pressure to approve more loans.

“We are pushing hard and have contacted the borrowers but we have not heard back from most,” said another banker at a state-owned lender.

Banks are also cherry-picking better-placed companies as recovering such loans, even though they are government-backed, is not an easy task, said a third banker.