Petrol, diesel becomes costlier by over Rs 3/litre in 6 days 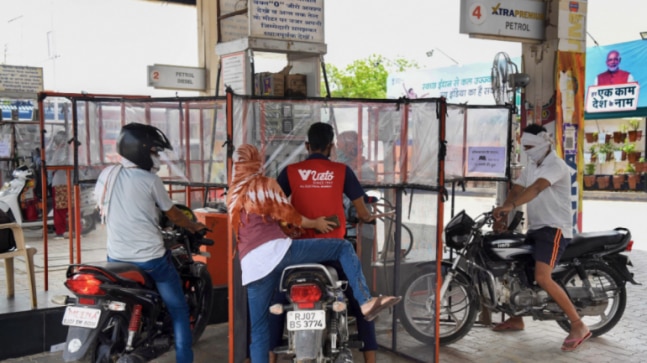 Petrol price has increased by Rs 3.31 in the past six days while diesel is now costlier by Rs 3.42 per litre.

Citizens have already started expressing dissatisfaction over the sudden rise in fuel price, especially at a time when many have lost their jobs. (Photo: PTI)

Petrol and diesel rates were hiked for the sixth consecutive day on Friday even as global oil rates tumbled for the past two days.

The rates have also increased in metro cities like Kolkata, Mumbai, Chennai.

It is worth mentioning that petrol price has increased by Rs 3.31 in the past six days while diesel is now costlier by Rs 3.42 per litre.

Citizens have already started expressing dissatisfaction over the sudden rise in fuel price, especially at a time when many have lost their jobs.

However, oil marketing companies indicated in several reports that petrol and diesel rates could rise further for another week as crude oil prices are picking up with global demand.

Though global oil markets saw a sharp rebound a few days ago, it has been falling for the past two days on fears of a fresh supply glut.

OMCs are allowed to make daily changes to fuel prices as pr the dynamic pricing system and resumed doing so after nearly 83-day break during the lockdown.

Analysts tracking the market say that petrol and diesel prices could rise further in India for a few more days as state government hit hard by coronavirus levy increased taxes to make up for losses.

Even then, a sharp rise of over Rs 3 in fuel prices could have a considerable impact on the earnings of cash-strapped citizens.

Also read | Biggest cut in oil prices since 1991. Will your fuel bill crash?