LPGA Doubles Down on LA Business Opportunities, Tournament in April 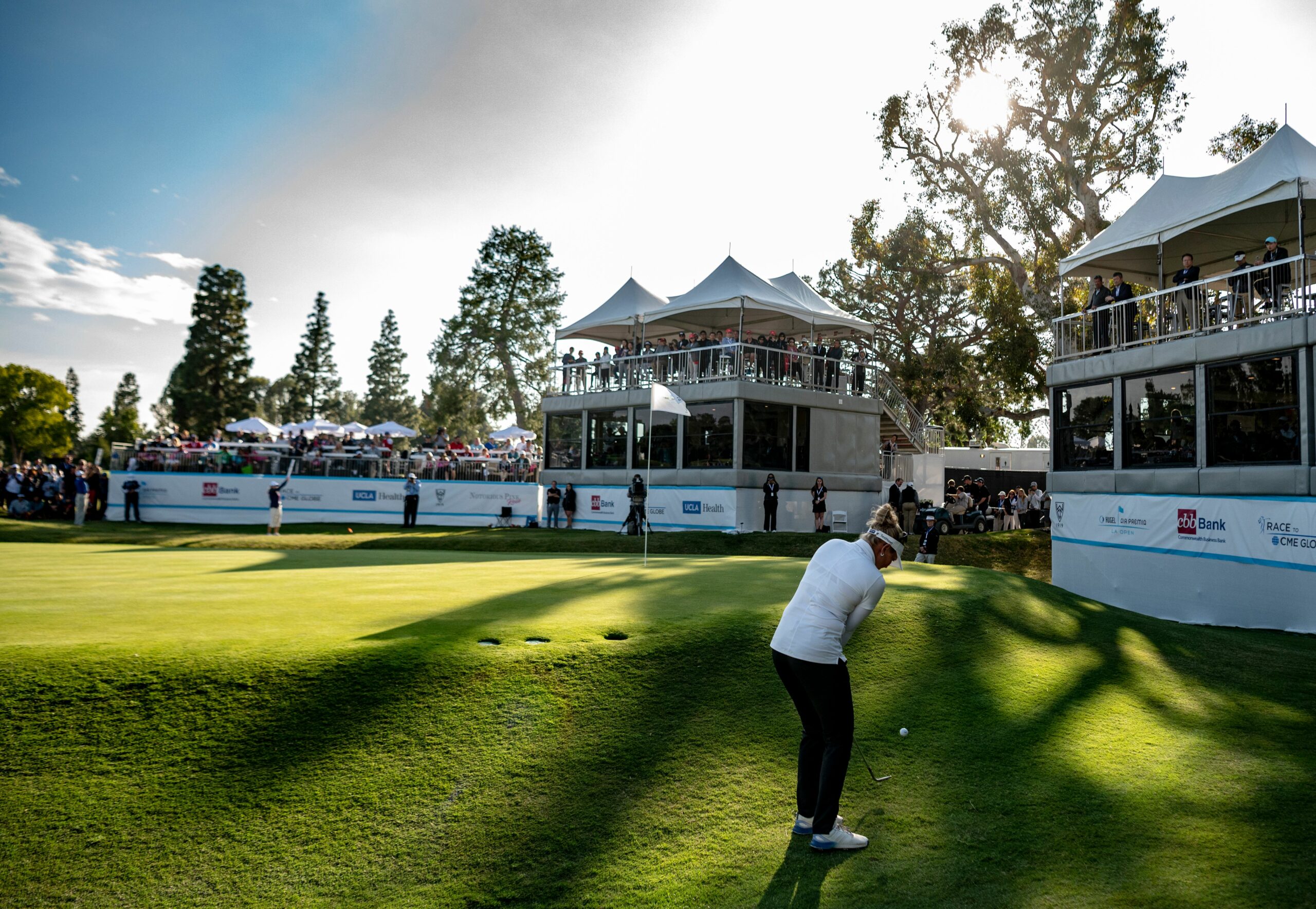 In Los Angeles, where major sports leagues, teams and individuals regularly re-invent themselves to resonate with their entertainment-savvy target audiences, the Ladies Professional Golf Association is making a re-entry onto the local sports business stage.
The LPGA recently announced that its 72nd season would return with a tour stop at the Wilshire Country Club — the $1.5 million JTBC L.A. Open, taking place April 21-24.

When the event launched in 2018, it had a cautionary three-year trial run commitment. It then navigated Covid pandemic realities, canceling in 2020 and then playing without galleries of spectators in 2021.

Based on recent history, the LPGA could have taken it as more bad karma that Los Angeles isn’t compatible.

Instead, it doubled down.

Outlyr, the company that owns and operates the L.A. Open as well as eight other LPGA Tour events, announced it was planting another flag in a different part of Southern California. It created the JTBC Championship at the Palos Verdes Golf Club, following the L.A. Open from April 28-May 1, and offering up another $1.5 million purse.

How has this confluence happened, and why now?

Outlyr’s Patrick Healy, the executive director of both LPGA Southern California tour stops, credits the way companies globally, nationally and locally are making a purposeful pivot in response to an important business movement.

“It really starts with a company’s visible commitment on global diversity, equality, inclusion – and doing it with authenticity,” said Healy. “DE&I is right up there as a top three priority when you’re looking at any list of corporate goal and objectives these days. There is no better property in sports to align yourself for all that now than the LPGA Tour.”

For those keeping score, the LPGA has tried 33 different events at 13 courses in Southern California going back to 1955. What could have been the final straw was the ill-fated 2005 Office Depot Championship at the Trump National Golf Club Los Angeles (actually, in Rancho Palos Verdes), which lasted only one year because players and organizers couldn’t navigate around nasty ground fog in October.

It only took the LPGA more than a dozen years to come out of that fog bank. Diversity, equity and inclusion business initiatives have also cleared the air.
“We are riding a great wave in terms of growth with DE&I initiatives, and we have buy-in from the local community and its businesses,” said L.A. Open Tournament Director Dave Tucker. “There has been a call to action to promote females and gender equality and the platform the LPGA represents in class and diversity is really why this L.A. Open has opened a lot of eyes to companies stepping up as sponsors.”

Added Healy: “Companies historically spend entertainment sponsorships on the men’s side of sports. But I think right now, to be blunt, putting your money where your mouth is, we’ve found the LPGA Tour as a great opportunity for corporate partners to get behind that mission.”

In 2018, Outlyr (then known as the Eiger Marketing Group) announced the L.A. Open would have two purposeful South Korean companies share title sponsorships. One was JTBC – the Joongang Tongyang Broadcasting Co., based in Seoul, already a media conglomerate partner with the LPGA.

Now, JTBC not only has top billing on both Southern California events, but also on the longer-standing LPGA tournament in Carlsbad on March 24-27. It is noteworthy that when JTBC acquired the Korean rights to the Olympics from 2026 to 2032, an incentive was that it includes the L.A. Summer Games in 2028.

Connecting the dots, the LPGA Tour has an abundance of successful South Korean golfers gaining global exposure, and Los Angeles has an abundance of Korean-American residents who crave the cultural infusion.
In the most recent Women’s World Golf Rankings, nearly 100 of the Top 300 list their nationality as South Korea. No. 1 overall, Jin Young Ko, a 26-year-old who was named the LPGA Player of the Year the last two years, has generated the most recent excitement, already No. 25 on the all-time tour money list at $9.4 million.

There is also top Korean-American golfers with local ties. Danielle Kang, No. 5 world ranked, attended high schools in the San Fernando Valley and played at Pepperdine. Her parents immigrated from South Korean, as did those of Michelle Wie West, the 32-year-old star living in Encino who came to the U.S. as a child prodigy.

That all makes dollars and sense in the Korean-American community of Los Angeles, where almost 400,000 of the nation’s 1.5 million people of Korean descent live, making it the largest gathering of this demographic in any city proper in the United States.

“The LPGA Tour sees huge value in bringing these back-to-back events to the Los Angeles area,” said Scott Ensign, senior director, tournament business development, LPGA. “L.A. has also been a particularly strong and important market for our Korean broadcast partner, JTBC, which in part illustrates our decision to host these two events in consecutive weeks with their partnership.”

The is also the significance of the Wilshire Country Club, which opened in 1919 and has hosted PGA Tour’s L.A. stops four times in the 1920s through 1940s. The Hancock Park site is adjacent to L.A.’s 2.7 square-mile area known as Koreatown. Its trendy Korean-popular restaurants attract not only LPGA star players as well as Korean-Americans from all parts of the area.

Inbee Park, a 33-year-old Hall of Famer ranked No. 6 in the world and No. 4 all time in career money winnings at $17.9 million, had the first-round lead at the first JTBC L.A. Open in 2018. She remarked at the time: “I never played a tournament outside Korea having this much Korean supporters out. I almost feel like I’m playing back home. It’s almost like a little Korea.”

Mark Beccaria, president of Wilshire Country Club and a hotel real estate investor in Los Angeles, said having the LPGA at his course goes well beyond any financial benefits it might experience by not having it. He said they are open to entertaining an extension of their current deal.

“It’s been a win-win relationship to show our club’s diversity and in all the ways of giving back,” said Beccaria. He also notes the 500-plus Wilshire Country Club membership now includes three LPGA players – South Korean native Hee Young Park, plus Southern California Korean-Americans Andrea Lee (raised in Hermosa Beach and a star at Stanford University) and Robynn Ree (Redondo Beach/USC), who have been able to put on youth clinics.

Aside from global and national companies, notable local businesses aligned themselves with the event. On the Tuesday before the tournament, a J.P. Morgan Chase-sponsored Women’s Leadership Luncheon takes place at Wilshire Country Club, bringing in some 100 busines people to network. Manhattan Beach-based Skechers has taken on several top LPGA players as endorsement clients. Commonwealth Business Bank started in Los Angeles in 2005 as an extension of its South Korean home base and is the official bank partner of the L.A. Open. The L.A.-based real estate investment Excelsior Partners LLC, has also been actively involved.

“None of this is sustainable without the support of L.A. local businesses stepping to the plate,” said Healy.

Skechers president Michael Greenberg notes that as a global brand based in L.A., “it was a natural fit for Skechers to partner with the JTBC L.A. Open as Official Footwear Sponsor and we look forward to watching Skechers ambassador Brooke Henderson defend her title as returning champion. We’ve been on Brooke’s team for over five years and always strive through our products and sponsorships to support women athletes in golf and beyond.”

To also illustrate how the sports ground is shifting, the LPGA Tour as a Southern California entity has had a 50-plus year presence in the Coachella Valley. What began in the 1970s as the Dinah Shore Classic blossomed into a fan-popular tour major event in the early 1980s. Yet the LPGA recently decided that it has run its course. It will still take place the first weekend of April at Mission Hills Country Club in Rancho Mirage, with a new title sponsor, Chevron, and a purse increased from $3.1 million to $5 million. But then it will transplant to Houston starting in 2023.

And the while, two events in the greater L.A. area are taking root.

Tucker said that as the L.A. business community embraces women’s pro teams as established as the WNBA’s Sparks and as new as the Angel City soccer club, “it is exciting to have another event that caters to professional females in a diverse space. L.A. has shown it has the business community to assist in partnering with so many events that make is a sustainable model.”

Adds Healy: “Los Angeles is an A-market and it is a big driver for us and the LPGA Tour to use L.A. as a place to showcase their talents as we come back open to the public after this pandemic.”