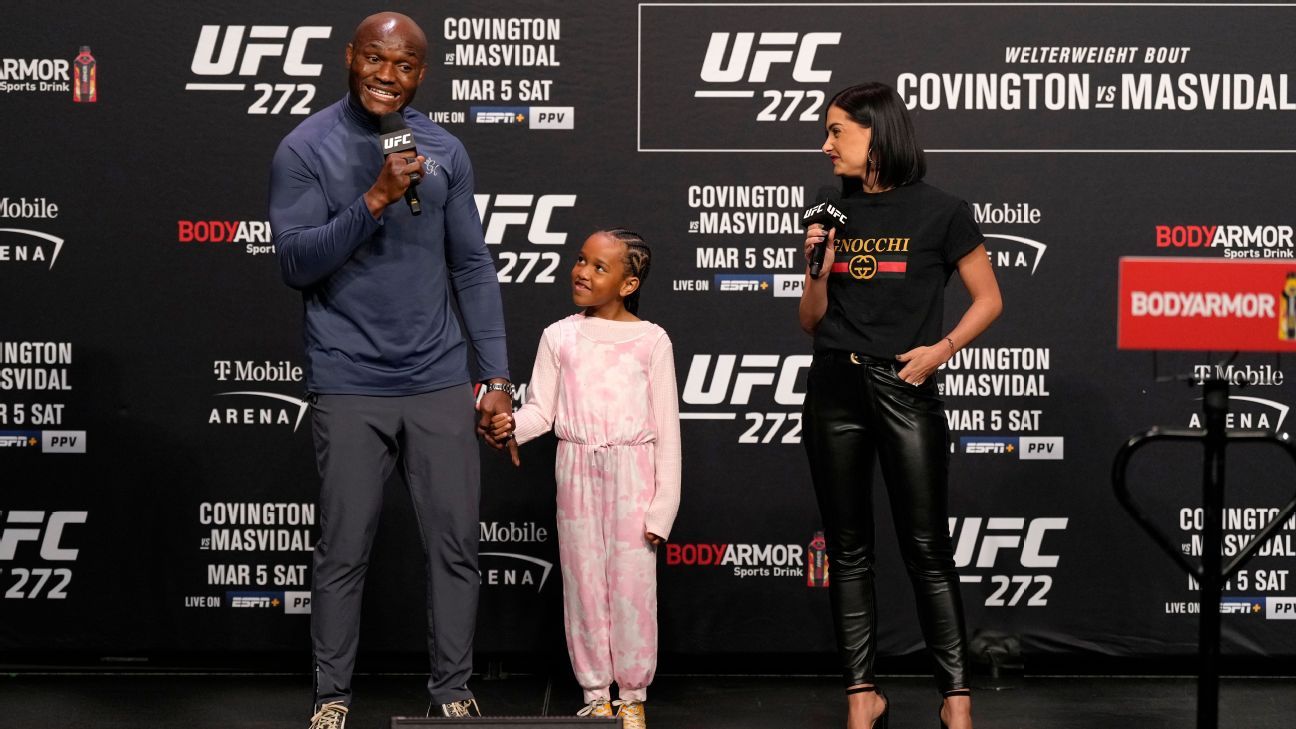 LAS VEGAS — Kamaru Usman stood on stage Friday afternoon at T-Mobile Arena, his daughter Samirah next to him. The UFC welterweight champion and ESPN’s pound-for-pound MMA king was participating in a question-and-answer session with UFC interviewer Megan Olivi ahead of the UFC 272 ceremonial weigh-ins.

Usman was asked if the winner of the UFC 272 main event between Colby Covington and Jorge Masvidal could get another title shot against him, after Usman defeated both men twice. Usman asked the fans if anyone there thought Covington beat him at UFC 268 last November, a fight Usman won by a close unanimous decision. A fair number of people cheered in Covington’s favor.

That was all Usman needed to hear. If Covington had left some doubt about who the best welterweight in the world was, Usman said he’d be ready to snuff that idea out in a potential third fight.

Former title contender Thiago Santos takes on the surging Magomed Ankalaev — a winner of seven straight fights in the Octagon — in a light heavyweight main event on Saturday.

“I asked the audience what they thought, and they thought Colby had a chance,” Usman told ESPN. “Absolutely.”

Covington has fought Usman closer than anyone since Usman has been champion. In the 10 rounds the two have been in the Octagon, Covington has won at least four — nearly half. And the polarizing, trash-talking Covington kept himself in contender position Saturday with a unanimous decision victory over Masvidal at UFC 272, his former best friend, roommate and training partner, in one of the biggest grudge matches in UFC history.

“If he stays at 170 and keeps winning,” UFC president Dana White said, “eventually you have to give the kid a shot again.”

Covington called out another former teammate, Dustin Poirier, after beating Masvidal. He said in the postfight news conference that he’d consider Poirier a “tuneup fight” before an eventual third fight with Usman. Covington said he wanted to be “very active” in 2022 and fight again in July. After that, he’d refocus on Usman. Covington said the fans at UFC 268 in New York last November felt like he beat Usman in that welterweight title fight.

“I’ve got unfinished business with him,” Covington said of Usman.

White was not as enthusiastic about Covington vs. Poirier as Covington was. Poirier has said he loathes Covington so much that he wouldn’t want him to get paid for a bout, and that they’d have to settle their differences in the street.

“You fight Poirier and then what?” White said. “He has to go in some type of direction.” 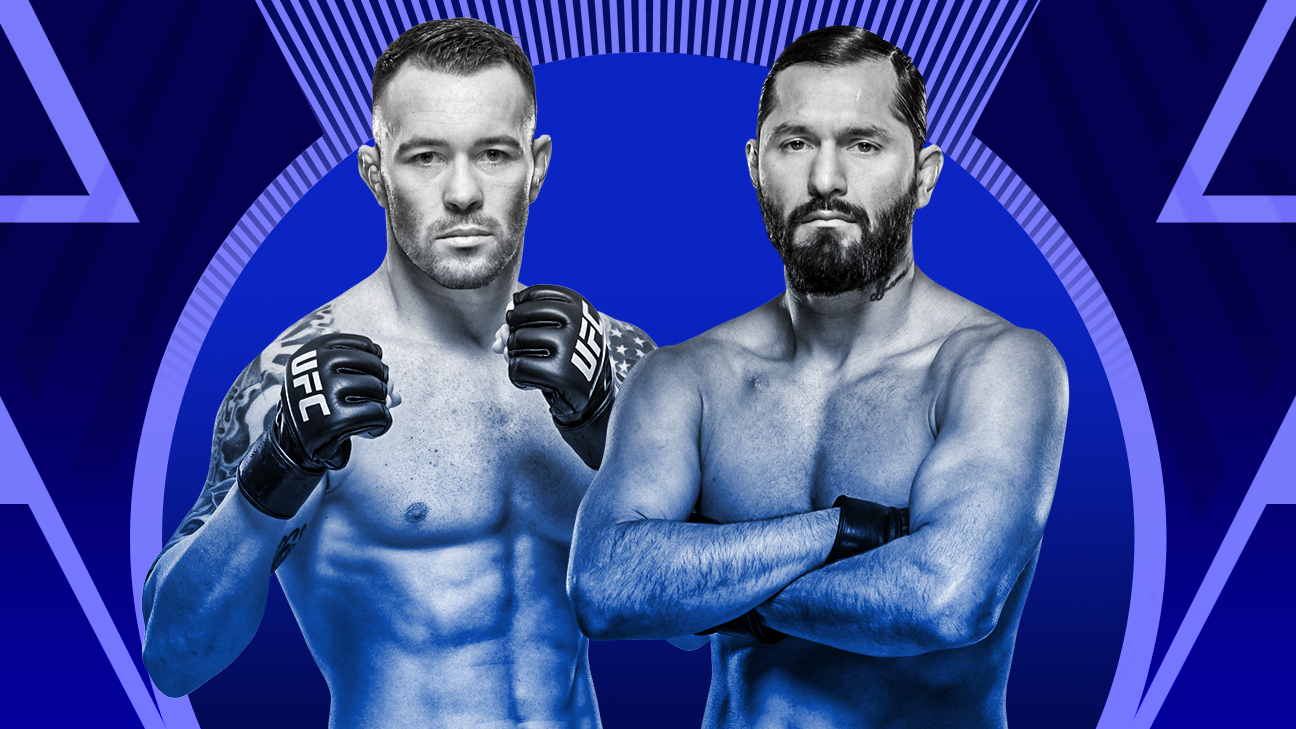 If the pay-per-view is purchased, all fights from UFC 272: Covington vs. Masvidal will be available to watch on ESPN+.

Watch the complete card on ESPN+

If Covington is able to work his way back to a title shot, it won’t be for a while. Usman said he’s targeting a title defense against Leon Edwards in July, provided his hand recovers from surgery Usman had in February to repair ligaments. After Edwards, Usman is serious about crossing over into boxing and challenging that sport’s pound-for-pound top fighter, Canelo Alvarez.

Usman would like to do the boxing match in September, but understands Alvarez is tentatively slated for his trilogy fight against Gennadiy Golovkin that month and notes that deals can be broken. Alvarez has expressed some level of interest, while UFC president Dana White has said he doesn’t think it’s such a great idea. In Usman’s mind, he “manifested” becoming a UFC fighter, then a UFC champion, then being the pound-for-pound top fighter in MMA. He achieved all those things, so why not a win over Alvarez, too?

There are two other big welterweight contender fights coming up that will help shape the future of the division. The UFC announced a fight between former title challenger Gilbert Burns and rising phenom Khamzat Chimaev for UFC 273 on April 9 in Jacksonville, Florida. A week later, Vicente Luque faces Belal Muhammad. The winner of either one of those fights has a case to be made for a title shot, after Edwards. Usman has already defeated Burns, though.

White said having the Chimaev vs. Burns bout be a title eliminator “makes sense,” but that’s as much as he would commit to.

ESPN analyst Chael Sonnen, who knows what it takes to get a title shot as a former multiple-time UFC championship contender, does not think Chimaev becomes the No. 1 contender unless he absolutely dominates Burns. But he does think if Covington wants to get another chance at the belt, he’d have to beat the Chechen dynamo.

“If you want to get to the title, it goes through Chimaev,” Sonnen said. “If somebody is willing to get in front of him and demand the same opportunity for themselves that Chimaev is going to get — which is a title fight next — I think that could at least be taken very seriously.”

As far as what Masvidal does, Sonnen is bullish about his future in the UFC, despite the loss. Masvidal just signed a brand-new contract Thursday that makes him one of the top-five highest paid fighters on the roster, according to Masvidal’s First Round Management team. Sonnen thinks a big fight is awaiting “Gamebred” — potentially a rematch with Nate Diaz, whom Masvidal beat to win the mythical BMF title in 2019. Masvidal said he’d take some time off after UFC 272 and be back in the gym in about a month to assess what he wants to do.

Usman’s plan is basically to fight Edwards in July, challenge himself against Alvarez and then see how the division plays itself out moving into 2023. Whether or not the boxing fight comes to fruition, if Usman successfully defends his title against Edwards, the next step could go in a number of directions. Maybe it’s Chimaev or Luque. Or maybe it’s even Covington. But all of them will have to be patient.