The Covid-19 pandemic has affected all walks of life all across the world. India hasn’t been immune either.

As the country, home to the fifth of the global population, struggles to adjust to what is an unprecedented national lockdown, let us take a closer look at how these restrictions have impacted its aviation industry.

The International Civil Aviation Organization (ICAO) earlier projected a 2% dip in international passenger capacity for India in the month of February when the Covid-19 outbreak was progressing slowly.

In the aftermath of the disease declared a pandemic, the same projections were recalibrated to a whopping 27% for India in the month of March.

Since then, owing to the increase in the number of imported Covid-19 cases, the Indian government has ordered the suspension of all international air traffic from March 23 to March 29 and subsequently till April 14. The domestic flights were also stopped from the midnight of March 24. Civil-aviation authorities have banned special VIP/VVIP flights to anywhere in India till April 14 as well.

This will have a huge bearing on the margins of all international and domestic airlines operating in the region. Back in late February, the ICAO and the Airports Council International (ACI) have projected the Asia-Pacific sector could suffer losses close to $12 billion. Note — this was way before India announced a national lockdown.

The North American sector is projected to see a 14% loss even as we are yet to see a complete lockdown of domestic flights in the USA. The European aviation industry is expected to suffer the biggest loss amongst continents with a whopping 15% decline.

“On March 5th, we estimated that industry revenues could take a hit of up to $113 billion as a result of what we thought then would be a worst-case scenario. We could not have foreseen the developments of the last days with massive restrictions on travel being put in place and with no clear understanding how long they will remain in effect,” said IATA CEO Alexandre de Juniac in a statement on March 17.

Meanwhile, the U.S. Treasury Secretary, Steve Mnuchin, on Tuesday summed up the current situation more bluntly. “This is worse than 9/11,” said the Treasury Secretary. “For the airline industry, they have almost ground to a halt.”

The U.S. Department of Treasury has said it is working on a plan to provide relief and stimulus payments for the airline industry, although no details on what that plan might look like have been released.

WHAT THIS MEANS TO INDIAN AVIATION

The Indian aviation sector contributes a reported $72 billion to the national GDP.

Assuming a 25% decline in industry revenues, the Indian aviation sector may be staring at around $1.5 billion-$2 billion of losses, given the current lockdown parameters.

It is ironical that the Covid-19 pandemic first resulted in a steep reduction of oil prices, which should have spurred growth of the aviation industry, and then crippled the sector, owing to a lack of demand worldwide.

World over, many airlines have cut down routes by 30-35% and have already started issuing pay cuts or unpaid leave to their pilots, cabin crew and other staff members.

It is likely that we will see similar steps being taken in India, if this lockdown is extended beyond April 15.

The immediate relief to the Indian sector could surely come in the form of resumption of domestic flights if and when it happens after April 15.

The international sector will still be a month or two away from resumption and normalisation as much of Europe and the United States are still reeling under the Covid-19 outbreak.

It is not yet clear if the Indian government like other nations is looking at providing some financial package to the industry so vastly affected.

Asia is equally circumspect now owing to the severity of the issue at hand.

Many airlines still operating have grounded their A380s and continue to fly smaller planes keeping in mind the demand and also to save costs.

The satellite images, which captured important airports across January, February and March, reveal the true extent of the lockdown in the Indian airspace.

Individually, major airports of the country cater to a lot of specialised destinations worldwide. Chennai’s international airport, for example, caters to a lot of locations ranging from Sri Lanka, Malaysia to Singapore and Australia (South-East of India) and also flights to New York and European locations.

Similarly, Kochi’s international airport is heavily connected to a host of specialised locations in the Middle East, Europe and elsewhere.

Hence, the individual operational capacity of the international airports will also depend upon popular destinations of the major airports in terms of the Covid-19 outbreak. 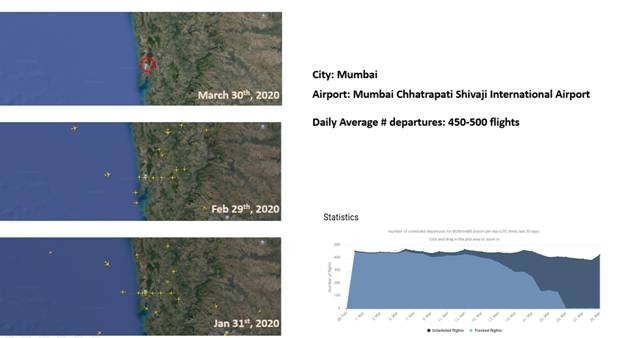 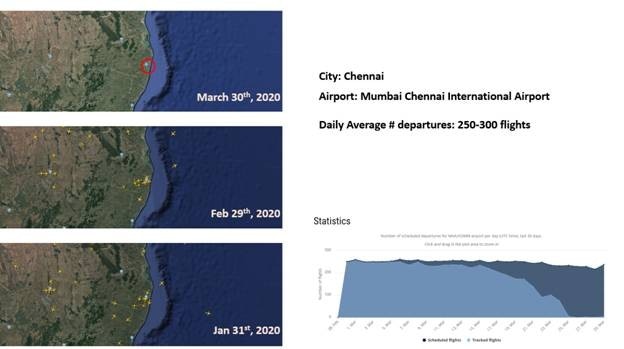 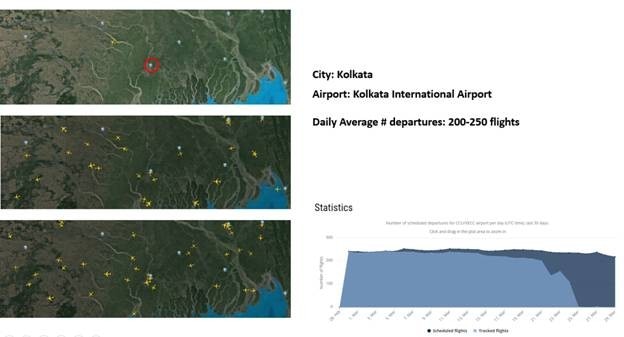 The only planes that continue to fly are those that are used to transport medical equipments, medical staff, military/security officials, etc. It remains to be seen if there is a staggered resumption of flight services after April 15.

You may have to wait longer to board your next flight!

(The writer is a Singapore-based Open-Source Intelligence analyst)