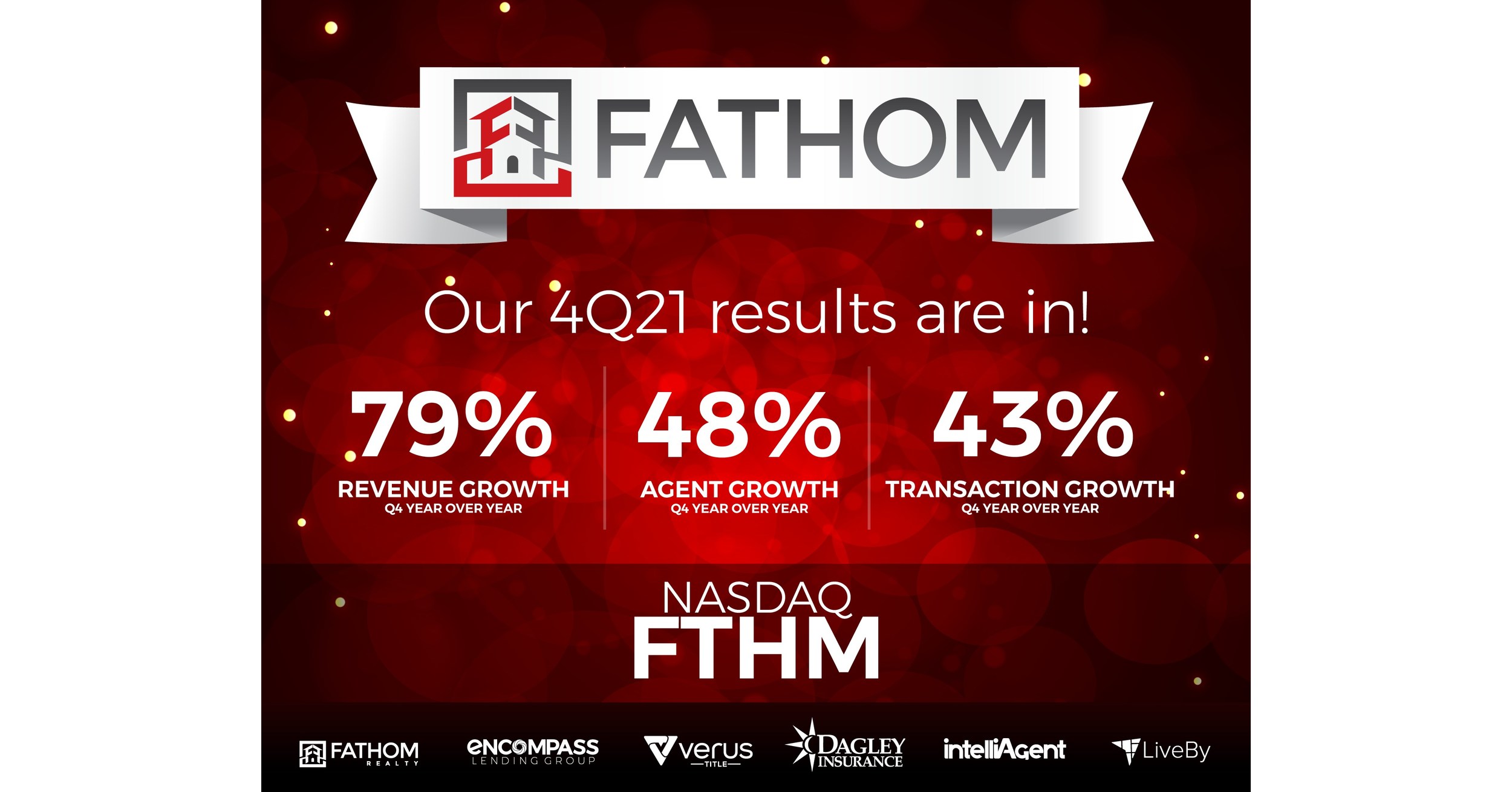 Segment revenue for the 2021 fourth quarter was as follows:

“Quarter after quarter and year after year, Fathom’s results have continued to demonstrate the power of what I believe is our truly disruptive business model,” said Fathom CEO Joshua Harley. “We have been successful in increasing revenue, expanding our agent network, maintaining strong agent retention, entering new geographic markets, and completing numerous strategic acquisitions designed to enhance our business and create new revenue streams.

“Fathom is winning through innovation and consistent growth, and by delivering real, long-term value to our agents, employees, clients, and shareholders,” Harley said. “We believe Fathom is on track to continue our strong revenue, agent, and transaction growth, and with the strategic investments we are making in each of our business lines, we look forward to demonstrating profitability in the near future.”

GAAP net loss for the 2021 fourth quarter was $3.6 million, or a loss of $0.24 per share, compared with a loss of $1.3 million, or a loss of $0.09 per share, for the 2020 fourth quarter. Weighted average diluted shares outstanding increased approximately 13% for the 2021 fourth quarter, compared with the same quarter last year. The year-over-year change in GAAP net loss resulted principally from investments in future growth, operational and overhead costs related to acquired companies, incremental costs due to transitioning to being a public company, and to increases in non-cash stock compensation expense and non-cash amortization of acquired intangible assets.

General and Administrative expense (G&A) totaled $9.1 million for the 2021 fourth quarter, compared with $3.6 million for the fourth quarter of last year. The increase in G&A was primarily attributable to recently completed acquisitions and to increases in non-cash stock compensation expense. It is anticipated that G&A expense will increase on an absolute dollar basis going forward, driven by acquisitions and costs related to scaling and integrating the Company’s business lines. G&A as a percentage of revenue is expected to decline over the long-term as revenue increases.

Fathom provides Adjusted EBITDA, a non-GAAP financial measure, because it offers additional information for monitoring the Company’s cash flow performance. A table providing a reconciliation of Adjusted EBITDA to its most comparable GAAP measure, as well as an explanation of, and important disclosures about, this non-GAAP measure, is included in the tables at the end of this press release.

Segment revenue for the 2021 full year compared with the prior-year period was as follows:

GAAP net loss for 2021 was $12.5 million, or a loss of $0.88 per share, compared with a GAAP net loss of $1.3 million, or a loss of $0.12 per share, for 2020. The year-over-year change in GAAP net loss resulted principally from investments in future growth, operational and overhead costs related to acquired companies, incremental costs due to transitioning to being a public company, and to increases in non-cash stock compensation expense and non-cash amortization of acquired intangible assets.

Cash and cash equivalents at December 31, 2021 increased to $37.8 million from $28.6 million at December 31, 2020. The Company’s cash position reflects recent acquisitions and an offering of its common stock in November 2021, which generated net proceeds of $32.5 million.

“We believe Fathom can achieve strong profits over time, while continuing to grow our business at high rates,” added Fathom President and CFO Marco Fregenal. “Our cash position is strong, and operational cash flow generation remains a significant priority as we continue to be mindful stewards of the money with which shareholders have entrusted us.”

The Company reiterated that it believes it can generate Adjusted EBITDA exceeding $40.0 million per year at 100,000 to 110,000 transactions per year. While Fathom has not provided a timeline for reaching this target, the Company believes it can maintain transaction growth rates similar to those since its IPO.

This press release contains “forward-looking statements,” including, but not limited to, the ability of the Company to demonstrate solid profitability in the near future. Forward-looking statements are subject to numerous conditions, many of which are beyond the control of the Company, including: risks associated with making and integrating acquisitions; technology risks; risks in effectively managing rapid growth in our business; reliance on key personnel; competitive risks; our need to attain profitability and/or raise additional funds for operations and future growth; and the others set forth in the Risk Factors section of the Company’s most recent Form 10-K as filed with the SEC and supplemented from time to time in other Company filings made with the SEC. Copies of our Form 10-K and other SEC filings are available on the SEC’s website, www.sec.gov. The Company undertakes no obligation to update these statements for revisions or changes after the date of this release, except as required by law.

To supplement Fathom’s consolidated financial statements, which are prepared and presented in accordance with GAAP, the Company uses Adjusted EBITDA, a non-GAAP financial measure, to understand and evaluate our core operating performance. This non-GAAP financial measure, which may be different than similarly titled measures used by other companies, is presented to enhance investors’ overall understanding of our financial performance and should not be considered a substitute for, or superior to, the financial information prepared and presented in accordance with GAAP.

Fathom believes that Adjusted EBITDA provides useful information about the Company’s financial performance, enhances the overall understanding of its past performance and future prospects, and allows for greater transparency with respect to a key metric used by Fathom’s management for financial and operational decision-making. Fathom believes that Adjusted EBITDA helps identify underlying trends in its business that otherwise could be masked by the effect of the expenses that the Company excludes in Adjusted EBITDA. In particular, Fathom believes the exclusion of share-based compensation expense related to restricted stock awards and stock options and transaction-related costs associated with the Company’s acquisition activity provides a useful supplemental measure in evaluating the performance of its operations and provides better transparency into its results of operations. Adjusted EBITDA also excludes other income and expense, net which primarily includes nonrecurring items, such as, gain on debt extinguishment and severance costs, if applicable.

Fathom is presenting the non-GAAP measure of Adjusted EBITDA to assist investors in seeing its financial performance through the eyes of management, and because the Company believes this measure provides an additional tool for investors to use in comparing Fathom’s core financial performance over multiple periods with other companies in its industry.

Adjusted EBITDA should not be considered in isolation from, or as a substitute for, financial information prepared in accordance with GAAP. There are a number of limitations related to the use of Adjusted EBITDA compared to net income (loss), the closest comparable GAAP measure. Some of these limitations are that: