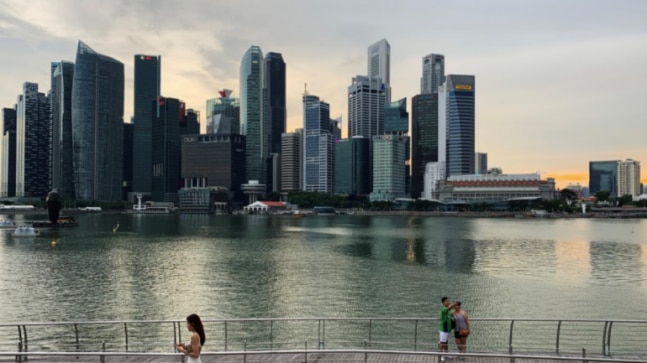 Singapore plunged into recession in the second quarter as the economy contracted more than 40 percent, preliminary data showed Tuesday, with the trade-dependent city state hammered by the coronavirus in another ominous sign for the global recovery.

The economy shrank 41.2 percent quarter-on-quarter and 12.6 percent on-year between April and June, according to data from the trade ministry, and analysts said it was the worst quarterly figure for gross domestic product ever recorded in Singapore.

It marked the second consecutive quarter of contraction, meaning the city state has entered a recession for the first time since 2009, when it was hard hit during the global financial crisis.

Singapore is one of the world’s most open economies and is seen as a barometer for the health of global trade, and the dismal figures are another warning sign that the global economy is heading for a deep and painful downturn.

The worse-than-expected figures will also ring alarm bells for Asia’s many trade-dependent economies — typically, Singapore is hit first before ripples spread across the region.

“But it’s not a surprise as the bottom line is that Singapore is a small city state, extremely dependent on trade in goods and services.”

The trade ministry said the massive contraction was due to restrictions imposed from early April to early June to stem the spread of the virus, which included the closure of many businesses.

It also attributed the shrinkage to weak external demand.

The construction sector contracted by 54.7 percent year-on-year and 95.6 percent compared to the previous quarter, the figures showed.

The services sector shrank 13.6 percent year-on-year, with tourism-related services and the air transport sector hard hit due to travel restrictions.

The manufacturing sector, however, expanded by 2.5 percent on-year in the second quarter, primarily due to a surge in output in biomedical manufacturing, the ministry said.

The data released Tuesday are based on so-called “advance estimates”. The figures are often revised once the full quarter’s data are available.

Singapore initially kept its virus outbreak in check through a strict regime of testing and contact-tracing, only for serious outbreaks to later sweep through crowded dormitories housing low-paid migrant workers.

It has reported more than 46,000 infections, including 26 deaths.

The long-ruling People’s Action Party saw its support slip at a general election last week, although it still comfortably retained power, amid concerns about job security and the economy during the pandemic.

The affluent country’s government has already rolled out about Sg$100 billion (US$72 billion) in stimulus packages, but the poor data could pile pressure on leaders to do more.

However, research consultancy Capital Economics said in a note that the second-quarter data will “mark the trough” in the downturn, and that Singapore was slowly emerging from its partial lockdown.

“Domestic activity started to rebound once restrictions on work and leisure began to be eased at the start of June,” it said.

“And while many industries, notably tourism and hospitality, will continue to suffer, the economy should rebound faster than others in the region.”