What do IMF projections mean for Indian economy 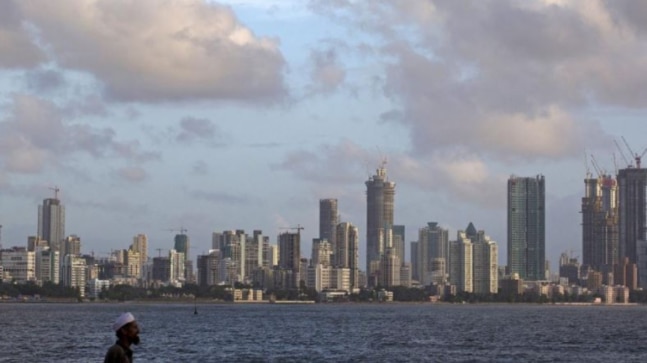 As the global economy faces its worst recession since the Great Depression of the 1930s, a deep-dive into IMF projections offers a glimmer of hope — and a momentous opportunity ahead — for India.

The latest projections follow the IMF’s forecast in January of a 5.8 per cent growth for the Asia giant in 2020.

It’s now slashed to 1.9 per cent — the good news being India continues to be one of the fastest-growing nations, with its projected numbers still staying in positive territory.

“The growth forecast is marked down by more than six percentage points relative to the October 2019 WEO (World Economic Outlook) and January 2020 WEO update projections — an extraordinary revision over such a short period of time,” reads the report.

In 2019, India achieved a growth of 4.2 percent. Many experts believed Asia’s third-largest economy then still reeled under the impact of demonetisation and the GST rollouts, which adversely affected small, medium and large scale enterprises.

Unlike 2008, where India was coming off a high entering into the recession, here India is already on a slippery slope.

But the latest IMF forecasts provide hope to the Indian economy — and should they come true, India may just start to get on a new bull run, considering all other factors are in favour. 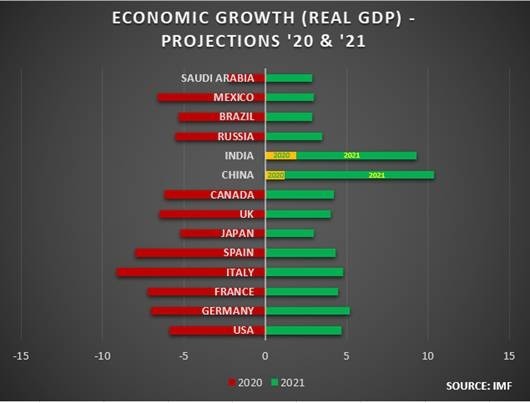 The projections for 2020 and 2021 are optimistic for India. One must not forget that we may see revisions of the projections if the Covid-19-linked lockdowns are not lifted, at least partially, after May 3.

India has thus far escaped from getting caught in the exponential growth trend of cases that have impaired most of Europe and the USA.

China is already back to business now and it is important that India too gets back on its feet soon enough.

The IMF predicts that barring India and China, most other nations will move into negative growth for 2020 before coming back up in 2021.

According to the IMF, the recovery forecast for 2021 depends critically on the pandemic being brought under control in the second half of 2020, allowing containment efforts to be gradually scaled back and restoring consumer and investor confidence. 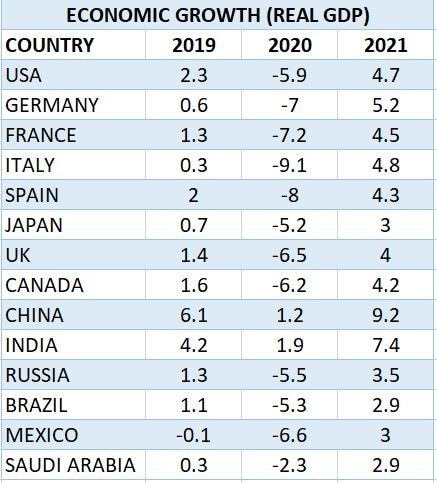 Smaller nations in SAARC and ASEAN regions are mostly projected to remain in the positive territory.

Nations that heavily depend on tourism and shipping as a percentage of their GDP will get affected the maximum this year. The same is reflected in the tables below. 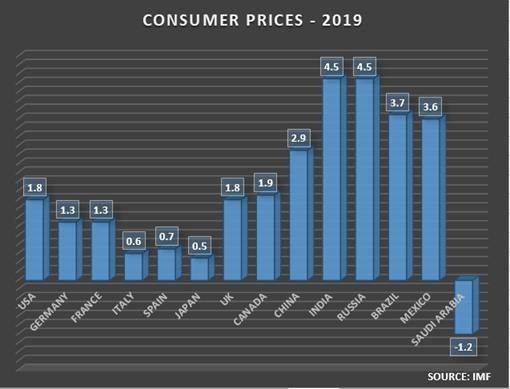 Saudi Arabia has been affected the most owing to the steep fall in oil prices while China, which is the initial epicentre of the pandemic, took a beating with respect to its manufacturing sector. In terms of the projections for 2021, the prices are expected to be back to 2019 levels across the globe.

The projection is expecting a sharp correction in consumer prices for the year 2020.

India can expect a 120 per cent decrease in the consumer price index compared to 2019. This is one of the steepest in terms of reductions and may be owing to the reduction in spending power of the Indians. WHAT CAN INDIA DO?

The 2008 financial crisis was the last time India felt a severe pinch in the economy. India had to endure side-effects of the same in the reversal of inflows from foreign institutional investors (FIIs), tumbling of the rupee valuation, lack of access to short term trade finances, the collapse of the stock market, job losses, etc.

Back then, India was able to limp out soon, owing to some effective measures. India’s GDP was still at a healthy 5.8 per cent in spite of the crisis.

Today, the Covid-19 pandemic is seen as a much bigger crisis and much different from the recessions of the last few decades. This has virtually brought the entire world to a standstill.

Supply chains world over have been affected and the backlogs at least with respect to perishable goods have gone waste.

The Indian government has announced a series of finance packages to offset the lockdown losses temporarily. For the long term though, they would need to do more to ensure India gets back on its feet as soon as possible.

The best thing for the Indian economy in the immediate aftermath would be to ease the liquidity crisis that may come into play. We may see a reduction in lending rates soon enough to offset any possible credit crunch. We should see some form of loosening of the monetary policy and administering new fiscal stimulus packages to lessen the blow of an economic downturn.

In terms of building for the future, India must use this period of resurgence to slowly, but surely, enhance its core strengths. There are broadly four areas in which fresh reforms can help provide the impetus — infrastructure, education, agriculture and investment climate.

Infrastructure is an ongoing process but with better infrastructure, India will be in a better position to face situations as thus in the future. Owing to a severe meltdown of the world market, there will be a need for people to upgrade skills and prepare themselves for the new future.

Agriculture and the associated supply chains have been massively affected during this lockdown and setting it right will enable the Indian economy to immediately come alive. Agriculture still has a substantial stake in the GDP.

The investment climate too needs to be reinvigorated. Especially, after demonetisation and the GST chaos, India needs some reassurance in the financial policy to attract FIIs. One can definitely trust more FIIs putting their money into India in 2020 and 2021, especially after a positive projection from the IMF.

The angst against China’s handling of the overall pandemic also offers a big opportunity to India in terms of becoming the manufacturing hub for market leaders in electronics and communications.

Japan and a few other nations have already drafted plans to reduce dependency on China for manufacturing. It all boils down to how effectively India steers clear of the Covid-19 pandemic.