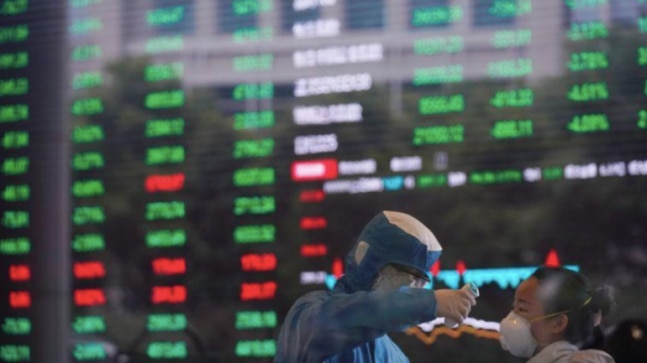 Stocks around the world rose Monday as governments prepare to gradually lift restrictions they imposed on businesses to slow the sweep of the coronavirus pandemic.

The S&P 500 was up 0.7 per cent in the first few minutes of trading at the start of a week chockablock with market-moving events.

Several of the world’s largest central banks are meeting, including the Bank of Japan, which announced its latest stimulus measures to prop up markets.

A rush of the biggest US companies are also scheduled to report how much profit they made in the first three months of 2020, including the handful most instrumental in getting the S&P 500 to rally over the last month.

More importantly, they may also talk about how they see future conditions shaking out, as some investors look beyond the devastation sweeping economies now to growth potentially returning in the future.

“Investors have written off 2020 as a shocker and are looking more intently into the landscape in 2021,” Chris Weston of Pepperstone wrote in a report.

Treasury yields crept higher in an indication of less pessimism in the market, but crude tanked again in the latest extreme swing that’s dominated oil markets in recent weeks.

In the US, the spotlight will be on the behemoth companies that have most helped the S&P 500 roughly halve its loss since the index began falling from its record in February.

The S&P is down only about 17 per cent since then, but the median company in the index is down 28 per cent from its high, according to Goldman Sachs.

A big reason for that is that a group of just five companies makes up a fifth of the index by market value. Because the S&P 500 – and index funds that form the core of many 401(k) accounts – move based on changes in market value, the performance of the big five overshadow those of smaller companies. Amazon, Apple, Facebook, Microsoft and Google’s parent, Alphabet, are all scheduled to report this week.

Asian markets began the day with gains after Japan’s central bank scrapped its ceiling on how much government debt it will buy to support the economy. The Bank of Japan also said it will buy an additional 15 trillion yen ($140 billion) of commercial paper and bank loans.

In Europe, Spain plans to start easing restrictions Sunday and Italy on May 4. France will announce its plans next month.

Other potentially market-moving events this week include data from the United States, China, Japan, Germany and France on inflation, trade, unemployment, industrial activity and retail spending.

Leaders of the US Federal Reserve are likely to announce they will wait to see the impact of earlier stimulus before taking more action, Hayaki Narita of Mizuho Bank said in a report.

The European Central Bank “will likely keep its options for easing open.”

President Donald Trump, who is up for re-election this fall, is pressing US state governors to ease anti-disease controls as early as possible.

Some states are lifting shutdown orders despite warnings that it could cause a surge in infections.

Others including Gov. Andrew Cuomo of New York say they want a bigger decline in new cases before rolling back curbs.

Signs of optimism are rising even in New York, though. The state hardest-hit by Covid-19 on Sunday reported the number of daily deaths had more than halved from the peak.

Construction and manufacturing jobs that represent low risks for workers will be among the first to resume once New York state begins reopening after the coronavirus shutdown, Cuomo said Sunday.

In energy markets, the cost for a barrel of US oil to be delivered in June sank 28 per cent to $12.23 per barrel. Prices have been swinging wildly as demand for energy collapses amid the halt to global economies and as storage tanks come close to topping out.

Brent crude, the international standard, fell 7 per cent to $23.08 per barrel.

It said conditions had deteriorated sharply with the pandemic and the recent price war between Russia and other producers.

Also Read | Only a Covid-19 vaccine will allow return to normalcy: UN chief

Also Watch | Lockdown 2.0 guidelines out: Will this save jaan and jahaan?