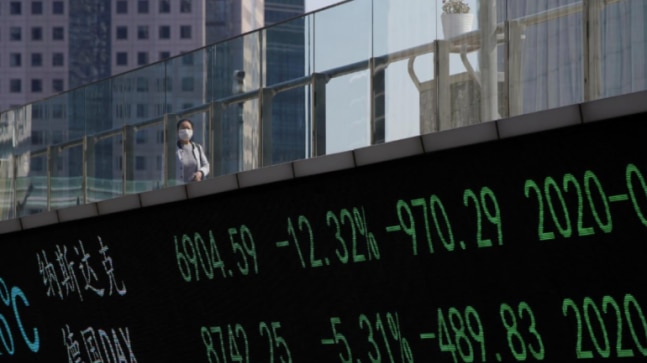 And the dollar dropped against main rivals, helping to push gold above $1,700 an ounce — the highest level for more than seven years — traders said.

“Markets continue to react in an odd way, mostly ignoring all the bad figures that have come their way and focusing on the positives, such as the China figures,” said Chris Beauchamp, chief market analyst at IG trading group.

But Julian Evans-Pritchard of Capital Economics warned “the worst is still to come” for China’s export businesses, with more economic headwinds likely in the months ahead as major trading partners battle their coronavirus outbreaks.

Investors will now await the release of China’s quarterly GDP figures on Friday, with forecasters predicting a 6.2-percent contraction.

“The data coming out of China is a rough leading indicator for the rest of the world,” noted Jasper Lawler, head of research at London Capital Group.

“The smaller exports drop is a clue that China’s first-quarter growth figures released on Friday could also surprise on the topside.”

After a strong start, European bourses tailed off approaching the half way stage, while London slipped into a slight loss.

The computer system of the Frankfurt Stock Exchange Xetra, on which several European exchanges depend, was meanwhile the victim of a computer failure.

The Paris CAC 40 was flat, with news that France’s economy is expected to shrink by a worse-than-expected eight percent this year after President Emmanuel Macron extended a coronavirus lockdown until May 11.

Britain’s economy could collapse by 13 percent in 2020 in the case of a three-month coronavirus lockdown, according to a scenario published by UK fiscal watchdog the Office for Budget Responsibility.

On the corporate front Tuesday, JPMorgan Chase reported a huge decline in first-quarter earnings after setting aside nearly $8.3 billion for loans vulnerable to the economic devastation from coronavirus shutdowns.

South Africa’s central bank has meanwhile slashed its main interest rate by a full percentage point, the second such cut in less than a month, and predicted its economy would shrink by 6.1 percent in 2020.

“There is still a lot uncertainty over whether the reduction in output will be enough,” said Neil Wilson, chief market analyst at trading website Markets.com.

“The biggest uncertainty for oil is how quickly does demand recover in the medium term? Indeed, this is the central question for risk assets in general,” he added.

Oil producing nations at the weekend thrashed out a compromise to cut output by nearly 10 million barrels per day from May, while Trump said the final figure could end up being double that level.

Oil prices have crashed as the coronavirus outbreak sends demand off a cliff, with a Saudi-Russian price war compounding the crisis.

Read | Is coronavirus situation in India less severe than other countries?

Also read | Challenge to fighting coronavirus in India: 36% wash hands with soap before a meal