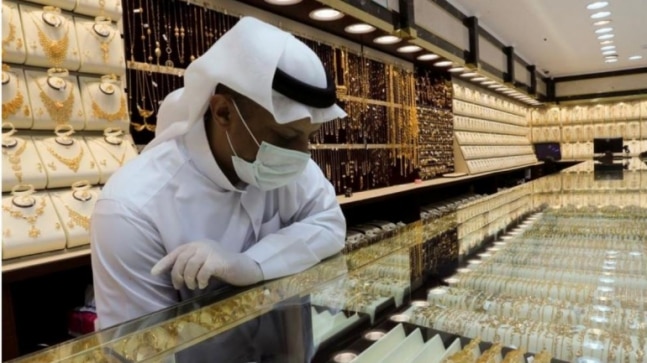 A Saudi jeweller wearing a protective face mask arranges gold jewels at a jewellery store during the holy month of Ramadan, after the outbreak of the coronavirus disease (COVID-19), in Riyadh, Saudi Arabia, May 5, 2020. REUTERS

Gold edged lower on Thursday, easing off a near eight-year high hit in the last session, as a selloff in equity markets driven by a surge in coronavirus cases prompted some investors to dump assets.

“The behavioural pattern we’ve seen this year is that when stocks and energy fall, there is a rush for cash across all asset classes, including gold,” said Jeffrey Halley, senior market analyst at OANDA.

However, with underlying support from safe haven buying and low interest rates, he added, “Any short-term correction is likely to be a slow grind lower, and not a rush for the exit doors.”

Indicative of gold’s overall appeal, which has driven a 16% jump in prices this year, holdings of the world’s biggest gold-backed exchanged traded fund, the SPDR Gold Trust, hit their highest in over seven years.

Gold has, on occasion, moved in tandem with equity markets this year, with steep selloffs driving a rush for cash and as traders met margin calls.

There has been a rise in cases elsewhere as well, including Brazil, Latin America and India, which is also the world’s second biggest bullion consumer.

On the physical side, jewellery consumption is likely to remain modest, “limiting the scope for further increases in prices,” said National Australia Bank economist John Sharma.

Also Read | #HandsOffPorotta trends on Twitter after Parota gets 18 per cent GST on it. Best memes and jokes