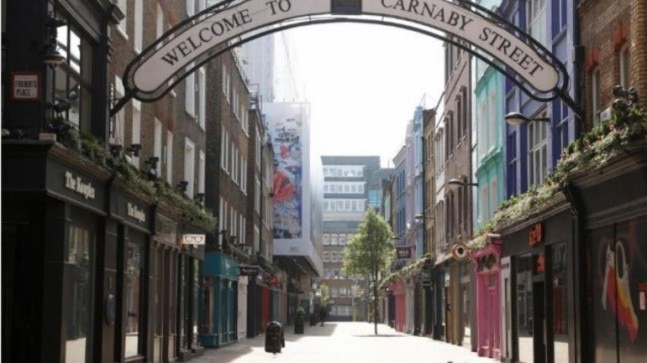 Britain’s economy looks set for a widely feared record contraction after figures showed retail spending plunged by more than a quarter and one in four firms stopped trading temporarily due to the coronavirus lockdown.

The British Retail Consortium (BRC) reported on Thursday a 27 per cent year-on-year drop in sales in the two weeks to April 4, which included the period after the March 23 start of a lockdown that has shuttered shops other than supermarkets.

“The closure of non-essential shops led to deserted high streets and high double-digit declines in sales which even a rise in online shopping could not compensate for,” BRC chief executive Helen Dickinson said.

A separate survey from the Office for National Statistics showed 25 per cent of businesses had temporarily closed or paused trading since the lockdown.

In those businesses that remained open, a fifth of workers had been placed on temporary leave.

Britain’s budget forecasters say the economy could be on track for an unprecedented 35 per cent decline in the April-June period.

Even if the lockdown eases and growth rebounds, annual output could still fall 13 per cent in 2020, the biggest annual decline in over 300 years.

Bank of England data, collected from March 2-20, showed lenders expect the biggest rise in business borrowing since the survey began in 2007 but for demand for new mortgages to fall by the most on record as the housing market freezes up.

The government has promised to underwrite 330 billion pounds ($412 billion) of lending to businesses to keep them alive while large parts of the economy are closed, but banks are facing a big backlog of loan applications.

The BRC said total retail spending in the five weeks to April 4 – this year’s March period for British retail sales – was down by 4.3 per cent compared with the previous year.

This fall came despite a surge in supermarket spending in the early part of the month, when British shoppers stocked up – and in some cases engaged in panic-buying – ahead of the lockdown.

This was the biggest monthly fall since the series began in 1995, once distortions linked to the timing of Easter and Black Friday sales promotions are stripped out, the BRC said.

Like-for-like sales, which take account of changes in floor space, dropped by 3.5 per cent.

Department store chain Debenhams and fashion brands Oasis and Warehouse are among the well-known British high street businesses to have fallen into financial difficulties in the past couple of weeks.

Credit and debit card company Barclaycard reported a similar picture in its monthly spending data for March, which showed a 6.0 per cent decline, the biggest since the survey began in 2015.

While supermarket spending was up 21 per cent on the month, travel spending, including public transport, sank by 40 per cent and consumer confidence fell to a survey low. Just 25 per cent of people surveyed felt confident about the economy, down from 42 per cent in February.