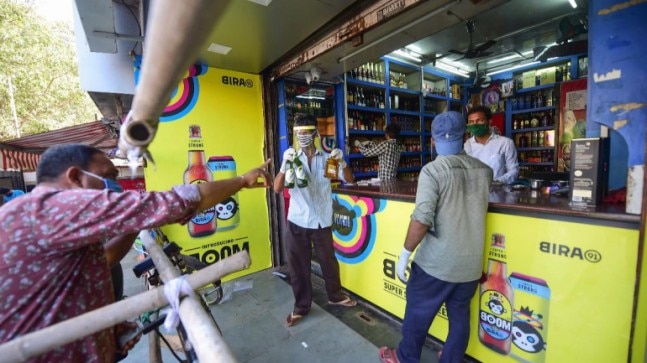 Liquor stores in various parts of India reopened for business on May 4 in accordance with the Ministry of Home Affairs’ order permitting the sale of non-essential items amid the ongoing nationwide lockdown to contain further spread of the novel coronavirus.

Day 1 of Lockdown 3.0 was marked with isolated incidents of violation of safety guidelines as massive crowds thronged liquor outlets, which were opening after around 40 days. In some parts of East Delhi, queues were seen outside liquor shops contrary to social distancing advisories issued in public interest. In some cases, the police were prompted to rein in the chaos and ask all customers waiting in queue to go back home.

Explaining what led to the amalgamation of customers outside liquor stores on May 5, executive chairman of The International Spirits and Wines Association of India (ISWAI), Amrit Kiran Singh told IndiaToday.in that this was the result of demand that had built up after over 40 days of closure of all liquor outlets owing to the nationwide lockdown. The lockdown came into effect on March 25 and was later extended till May 4 and then to May 17 with limited relaxation of restrictions.

Circles were made outside liquor stores to ensure social distancing and queues adhered to safety advisories on Day 2 as compared to the first day, added Amrit Kiran Singh. He also said that the reopening of liquor shops comes as a respite for state governments already reeling under the burden of sluggish GST revenues at a time of unprecedented crisis.

Amrit Kiran Singh added that ISWAI on May 1 handed over a three-phased approach to the Union government in an effort to make liquor shops across the country safe for both customers and employees. Termed “SAFE SHIELD”, this proposal is aimed at minimizing the risk of transmission of the novel coronavirus at liquor outlets.

The first phase of the “SAFE SHIELD” approach includes demarcation of circles outside liquor stores to ensure social distancing among customers along with regular sanitisation of contact-points inside the shops themselves. It further proposes the use of masks, gloves and trays by employees to ensure contactless sale of liquor.

Similarly, the second phase talks about a micro-site for liquor outlets in each state. Retail shops can register with the excise department on these micro-sites and employees can be trained on how to adhere to safety protocols, certifications can also be given for this training, Amrit Kiran Singh said.

The third and final phase of the “SAFE SHIELD” involves the Excise Department that can allow home delivery of alcohol, Singh added.

Earlier this week, the Punjab government gave a green signal to the home delivery of alcohol and state-run liquor outlets in Tamil Nadu (TASMACs) opened for business on Thursday while adhering to guidelines prescribed by the Madras High Court. The West Bengal government is also looking to adapt to the home delivery mechanism for sale of liquor.

However, Mumbai’s civic body, the BMC has reiterated its decision to shut all shops selling non-essential commodities, including liquor stores. Haryana has allowed all shops selling alcohol, outside of containment zones, to open from 7 am to 7 pm. Only 172 liquor shops in Delhi have been issued clearance to sell liquor, provided that a 70 per cent ‘Corona Cess’ is levied on the MRP of each bottle. In Telangana, liquor shops will open from 10 am to 6 pm under the supervision of the police.

Initial reports suggest that the Delhi government raked Rs 5 crore in revenue from the first day of sale of liquor while the Karnataka government raised Rs 463.6 crore in liquor sales between May 4 and May 6. In FY2019-20, liquor sales accounted for Rs 2.48 lakh crore of revenues for states, Amrit Kiran Singh said. He also told India Today about rough estimates suggesting that the states may have lost out on revenues amounting to Rs 28,000 crore owing to the closure of liquor stores during the lockdown.