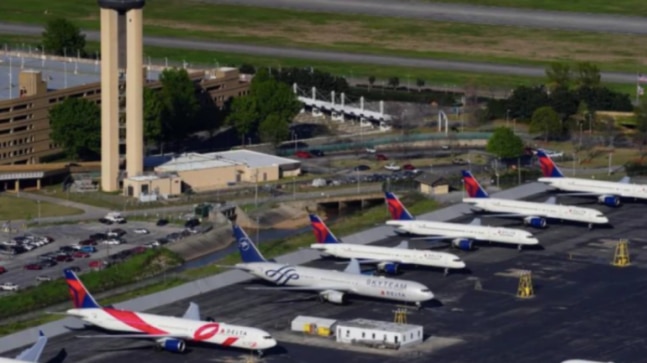 The Covid-19 pandemic has impacted economies around the world like no other event that experts can recollect since the Great Depression.

Some of the strongest economies around the globe are struggling to cope with the situation in the wake of an unprecedented demand shock and a shutdown of all key economic activities that drive growth.

In the United States, the world’s most powerful economy, a massive number of jobs losses have been reported due to the Covid-19. Donald Trump on Thursday said the “US has been attacked and Covid-19 is not just any flu”.

India, too, has been hit hard. Global rating agency today slashed India’s GDP projection for FY21 to 0.8 per cent. The Covid-19 pandemic has been a huge blow to India, especially since many sectors were already facing a crisis when the virus storm hit.

The virus not only accelerated the crisis but also ended the good run that some sectors were enjoying. Adding to the worries in a steep demand shock that experts say classified as a long-term worry, citing uncertainty in the post-pandemic landscape.

If not all, key sectors that make up a larger portion of India’s GDP have been taken completely or partially out of action. Reports of job losses, unpaid leaves and other concerns are being reported on a daily basis from such sectors.

CMIE data shows how unemployment in India spiked in the month of April. The situation is expected to worsen if the situation shows no improvement over the next few months.

Here are 5 sectors in need of urgent help and cooperation from other sectors better position amid the crisis:

The Micro, Small and Medium Enterprises (MSMEs) are literally the backbone of all Indian sectors and often engaged in manufacturing and export activities — two key drivers of the Indian economy.

Today, almost all MSMEs are out of action due to the lockdown, chocking all production activities at major firms across sectors. There are several reports that indicate how MSMEs are reeling under crisis and have no money to pay their employees.

From leaders to experts and industry bodies, everyone has appealed the government to increase its relief package for the MSME sector, which contributes to over 30 per cent of India’s GDP.

It is worth mentioning that a majority of the small units may have to shut shop if they do not get a relief package soon. The government is planning to release Rs 20,000 crore relief package, divided into two funds, for helping MSMEs.

Describing the risks MSMEs face, the director of a firm that provides integrated services for MSMEs told India today.in about the current sector outlook and the challenges.

Rajesh Gupta, Co-founder and Director, BUSY Infotech, said, “The world is going through something unprecedented. Nearly a third of the globe is in lockdown. Due to this lack of trade and shrinking sales, MSME’s are feeling the burden of loans, repayments, GST filings, etc”

“Even after getting support from the government, many of them are almost on the verge of losing their control over losses and unable to generate revenues as well and fighting for their survival. It will be very important for the government to take initiatives and announce more relief packages for MSME’s and measures.”

Saying that MSMEs will enter “uncharted territory” after the lockdown ends, he urged the government to provide cash infusions that allow MSMEs to give workers jobs and buy raw materials.

“The government will also need to increase the insolvency limit for SMEs and MSMEs to 1 crore from 1 lakh. Most businesses today are not earning revenues; hence they cannot meet their obligations to creditors,” Gupta added.

MakeMyTrip co-founder and CEO Deep Karla in a recent group interaction told India Today TV that the tourism sector was the first to get disrupted by the impact of Covid-19 and will be the last to see a resumption of activities.

Several reports indicate that the tourism sector will be worst affected due to the virus pandemic.

The government also knows how bad the sector has been hit and acknowledged the same through a press release. A KMPG report from last month had already predicted the Indian tourism and hospitality sector to lose more than over 3.8 crore jobs.

That figure is bound to increase after the lockdown was extended to May 3.

An article on the Economic Times said India’s aviation sector may lose as much as Rs 5 lakh crore along with 4-5 crore job losses.

As the outlook of the industry is expected to stay under pressure for at least next few months owing to increased uncertainty, there are many calls for a minimum wage package for affected workers who have been rendered jobless since the lockdown.

The crucial aviation sector that connects nations across the world is witnessing a flurry of layoffs and pay cuts. Some workers have been asked to go on forced unpaid leaves by aviation companies, who have been hit equally hard as the tourism and hospitality sector.

Each day, there are reports of global airlines announcing furloughs or layoffs as operational strains deepen in the wake of the lockdown.

CAPA India, a leading travel and tourism consultancy firm, said last in a report last month that global aviation activity has sunk over 66 per cent in the wake of the Covid-19 crisis.

“In India, the decline in aircraft movements has been even more dramatic. With the exception of a handful of cargo and repatriation charter flights, India’s skies are largely empty,” the April 2020 report said.

Since the report was prepared before the lockdown 2.0 was announces, the effects on the sector may have amplified.

It fears that the situation in the post-virus setup would remain pretty much the same for the aviation sector.

“From a point of complete suspension of travel, recovery is likely to be slow. Demand will be suppressed due to economic dislocation; slow or even negative GDP growth; broken supply chains; low consumer confidence; and concerns about lingering outbreaks of COVID-19, especially if travel insurance companies refuse to provide cover for associated medical expenses or travel disruption costs.”

The sector, like the travel and tourism segment, is also in urgent need of financial help to support employees.

The automobile sector in India has been forced to stop key manufacturing activity and has led to a sharp drop in production and sales.

With most of the plants shut, big automobile manufacturing companies have announced pay cuts and are waiting for a decision on resumption of dealerships.

However, RC Bhargava, an industry veteran and Maruti Suzuki Chairman, told India Today TV how the automobile sector is interlinked with many other small sectors that manufacture key parts, which are then used for manufacturing vehicle components.

Therefore, Bhargava like many others from the industry is urging the government to at least open a few dealerships to resume businesses.

He also said that a package for the industry, especially for the ones at the bottom of the manufacturing chain, is necessary.

Finally, the real estate sector outlook has also suffered immensely due to the lockdown, which was announced to prevent the spread of the deadly Covid-19 virus.

ANAROCK Group in a report last month said housing sales will fall 25-35 per cent while office absorption will fall in the range of 13-30 per cent on a year-on-year basis.

In the long run, such a reduction in commercial and residential property could reset the future of real estate in India, the report added.

Besides, while construction activities have resumed in some areas, there are many hotspots areas in urban areas where key construction projects have been put on hold for several weeks due to the lockdown.

This has led to unemployment among millions of migrant labourers in India, who are engaged primarily in construction activities. Hardly anyone of these labourers, who live on daily wage, have additional savings to see off the lockdown period.

The government has urged employers to not cut wages or lay off such labourers, reports suggest that companies are left with no choice but to let their workers go due to cash flow issues.

The government has announced several relief measures for them, but it is hard to ensure whether the benefits are reaching all.

In such a scenario, the government could announce a job security scheme that covers certain employees, similar to what some countries including the UK have done. While there are the five sectors that need urgent help, the outlook of other sectors in India are also deteriorating.

A larger job security scheme for those who have been laid off could be the only way to protect affected citizens.